Request a Quote
Description: Fire-Circus-Magic fused with comedy and audience participation
This show is a comedy juggling and manipulation act, with audience interaction. From hat and cane, to whipping the cigarette out of the mouth, and a comedy version of the 100 foot rope escape. Finishing with high impact fire manipulation and Duo Adagio. (Slow Acrobatics)  Influenced by W.C. Fields and traditional vaudevillian entertainment.

This show is ideal for after dinner entertainment at corporate functions or private events, moreover the show can be divided into variety entertainment spots in Gala or Cabaret style events. In this case other juggling props such as: shaker cups, clubs, balls, and up to 4 hats can be introduced.

Training:
7 years Wushu (Martial Arts) Training in and 1 month in
Since 1994 Trial and Error with new & old equipment both on and off stages
Short Courses in Acting, Mime, and Juggling
Mentoring with Magicians, Mime Artists, and Jugglers

“Your excitement, skills and professionalism shone through and certainly helped us to create some very special magic on the night. All present enjoyed your performance immensely.” Di Cahill

“The performance itself was truly amazing and skillful.” Prudence Chang

Chris Directed and Choreogrphed 4 Fire Artists, 2 Belly Dancers and 3 Percussionists for a Meet and Greet Component and 20 minute Feature Show

“The Show and performers really set the scene for the night and pumped the crowd up for a fantastic evening.” Brendan Shaw 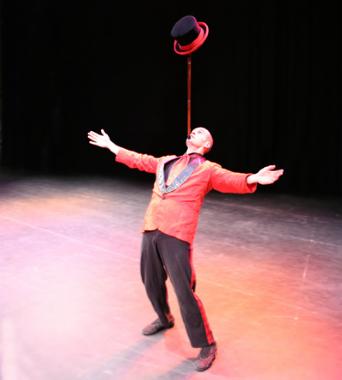