Fresh off of a sold-out North American tour, Dirk Darrow, Australia’s funniest American detective is hot on the trail of a killer... season!   Combining more genres than any other show, Dirk Darrow: NCSSI is the world’s only one-man film-noir comedy magical mind-reading murder mystery!  In a gadget obsessed age, this show takes a step backwards in time to the feel of the 1930‘s while keeping the cutting edge humour of a modern comedian.  Part stand-up, part whodunit, part mentalism, all glorious retro film noir, Dirk Darrow engages audiences in a performance experience unlike any other.

Experience the thrill of solving the crime while your mind is blown by Dirk’s seemingly impossible deductions gathered from clues provided by the audience. This is an ambitious show, uniquely integrating magic into a murder story without losing the plot. Marvel at Dirk’s astonishing detective skills, as he makes seemingly impossible deductions from clues supplied by you, the spectator!  Witness supernatural feats that will blow your mind!  Gasp at his shameless exploitation of grand hyperbole! Think Boardwalk Empire meets X-Files meets Naked Gun.

Now available for hire in a non-theatrical totally accessable traditional comedy/magic format of trick, trick, trick, or as a very experienced MC.

“A winner from start to finish!”  - The West Australian

“Impressive.  Dirk's Cluedo-ish romp is a mere bloody backdrop to conjure up platforms for his sleight-of-hand skills.”
- Herald Sun

Tim Motley shines in this film noir/comedy routine/magic show...  a great performance that had the audience laughing from start to finish.”  - Capital Critics’ Circle,  Canada

“As quick with a joke or an ad-lib as he is with a bit of sleight of hand.  - Visitorium

“In a world of crime, laughter is good, so... investigate Dirk Darrow before his number’s up.”     - Rip It Up, Adelaide

I enjoyed every second of the show, and was disappointed to have it end.”     - Adelaide ArtBeat

“Dirk Darrow: NCSSI is a funny and impressive one-man show. Motley is a talented performer who has created a great comedy character in Dirk Darrow. Lovers of Noir, mentalism or character based comedy should make sure to join the private eye for his next investigation.”  - Perth Now

About Tim Motley:
Dirk Darrow’s creator, Tim Motley, has performed throughout 28 countries from shantytowns and riots in South Africa to celebrity audiences such as Richard Branson, Baz Luhrmann, and Lachlan Murdoch. Tim has featured with this and other shows at dozens of European and Canadian festivals while also having appeared as a stand-up comic on Melbourne’s Channel 31 many times.  His exploits also include being a radio DJ for RRR Melbourne and URE England. 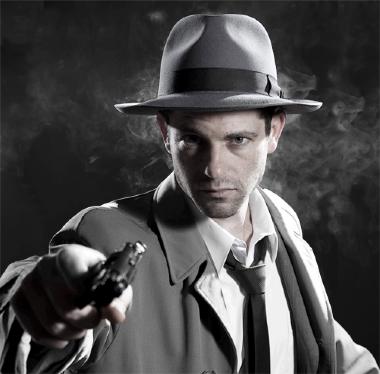