“That was Astonishing – you are a stunning Magician” Dawn French - AGT

His shows feature some of the world’s most impressive illusions (designed and built by the same team that work alongside the famous David Copperfield) as well as jaw-dropping escapes, levitations, transformations, special effects and mind blowing disappearances, Boyd’s incredible productions will surprise and delight.

Born in Melbourne, Michael Boyd’s magician grandfather taught him all about the world of magic and by the age of 13, Boyd joined the Young Magicians Magic School to hone his craft. Following high school he hit the road performing three shows a day until he eventually got his big break on the TV show “Pot Luck”. Since then, his career has skyrocketed and he’s now one of the most acclaimed in the country.

Michal Boyd’s spectacular illusion and dance productions have toured the globe. From Asia to the Middle East – Casinos to cruise ships his shows break down the language barrier with the art of magic and illusion.

Shows can be tailored to run for anywhere between 15 to 45 minutes and at the end of the show, he will work in with you to pre-select a couple of people to become the stars of the show in hilarious magic acts. Add dancers, Grand Illusions and the latest special effects and you are set for a night of pure entertainment.

Whether you are looking for a full-length stage spectacular or an intimate evening of illusion – Michael Boyd will have the perfect entertainment solution.

I don’t know how you did that Brother, you left me speechless”    Timomatic- AGT

“I would highly recommend Michael Boyd The Illusionist as your next big entertainment break, as it was great to have him perform at our annual President’s Gala Ball & Awards Dinner on Nov 14th 2014! The audience was captivated by his Illusions and were talking about it weeks after, trying to figure out how he did it! If you’re looking for a fun entertainment act Michael Boyd the Illusionist is the man to go too!”  Azrin Olamaei(Marketing & Event Coordinator) 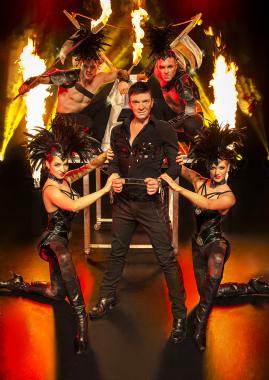