Request a Quote
BIO: Australia’s only Comic Magician & Hypnotist, PiP Comic Illusionist is being recognized world wide as one of the best acts out of Australia!
You may have seen PiP on one of his many TV appearances including being a finalist on Australia’s Got Talent 2012 or you may have seen one of his shows when touring around the globe. His tours have included sold out shows during the Adelaide Fringe, Sydney Comedy Festival, Melbourne International Comedy Festival, Melbourne Magic Festival & at major venues including the iconic Sydney Opera House. PiP is also a regular Guest Entertainer on cruise lines including Royal Caribbean, Celebrity and Carnival.
PiP’s career has seen him performing in a wide variety of situations for a diverse mix of audiences, from country pubs to thousand plus seat show rooms, corporate dinners as well as opening for artists, groups and bands such as Justice Crew, Timomatic, Nathaniel and Samantha Jade. He was asked by Warner Bros. to be the face of their campaign for the DVD launch of The Incredible Burt Wonderstone, starring Steve Carell, Steve Buscemi, Olivia Wilde, Alan Arkin and Jim Carrey. In 2006 he was one of only 18 teens chosen worldwide to compete at the World Magic Seminar. In 2007 he was requested to come back and do a second performance during the APEC conference and in 2009 he performed 46 one man shows at the Melbourne International Comedy Festival in just 4 weeks.
Not only bringing people to the edge of their seat in amazement, PiP’s natural wit and comedic timing leaves audiences in stitches the whole show, which they will be talking about for years to come.
PiP is no mainly based in the entertainment capital of the world, Las Vegas, but does make occasional trips home for his clients so please don't hesitate to see if he is back when your event is on.
Show Types:
Close-Up/Walk Around Magic
As one of Australia’s Premier Close-Up Magicians, PiP brings you a very special way to entertain guests at any function or event with his slight of hand expertise. With absolute miracles happening in your hands combined with PiP’s clever humour, this is personal entertainment your guests will never forget. Great for Cocktail Parties or when you want personal table to table entertainment.
Comedy Magic Stage Show
Want some laugh out loud entertainment that will also leave the audience amazed? Watch as this hysterical saga between Magician and Assistant unfolds on stage with unsuspecting audience members get mixed into this show combining great comedy with world class magic. This can be timed from a 5 - 10 minute spot to a full hour show.
Hypnosis Show

Witness the only show were the audience becomes the stars of the show. PiP use his unique comedic humour to create an unforgettably hilarious stage show where the possibilities are endless. Every show will be its own unique performance where the on-stage guests bring their unique personalities into clever rib-tickling situations creating high impact entertainment.

Testimonials:
“PiP Comic Illusionist's wit is as quick as his sleight of hand in this vastly entertaining show... The ace up PiP's sleeve might be that distraction and misdirection are so much easier when the audience has tears of laughter running down their face.”
Rip It Up Magazine Adelaide Fringe 2010
“I watched in amazement as PiP got ordinary people to do activities with such hilarious results that even their friends were shocked and surprised.”
Herald Sun Melbourne International Comedy Festival 2009
“I wanted to drop you a line and let you know I thoroughly enjoyed Hypnolarious. The evening flowed seamlessly, the music was obviously selected with much consideration toward a multi generational audience... it was a thoroughly entertaining evening.”
Bobby Bradford - Mo Awards Chairman
"Well its been nearly three months since Sydney and our members are still going on about how great you were. As an event organiser I can hope for nothing more than what you delivered (and exceeded) in terms of expectations. Thank you for your generous attention and remarkable ‘services’ and for a night that will long be remembered by all who attended your show."
Sarah Carnovale - Australian Glass & Glazing Association
"It was great to have you there. You were a hit!"
Nicole Latham - The Argyle & Löwenbräu Promotions Manager
“All went home happy with laughs under their belt.”
Silvana Marangoni - Education Program Officer St George Division of General Practice
“We had a great time, everyone was really happy. Thanks for your performance!”
Esther Huebel-Kobilke - Personal Assistant to Managing Director ThyssenKrupp Mannex Pty.Ltd.c
“Now I’m not normally a magic sort of guy and the thought of being hypnotized and made to do unusual things simply terrifies me, you know its not for me. But seriously I asked PiP to do a few tricks at a company function, then I ran into him at the Russell Brand party at the Ivy and then he performed at my 40th birthday party and bugger me if I haven’t become his biggest fan. He’s just off-beat enough to be engaging, he’s talented enough to be convincing and he’s determined enough to become a star. PiP is a magician because he can turn “non-magician” types into true fans of the genre. He’s really good. Use him. If only I could figure out how he does it? Magic, I spose.”
Stuart Gregor - Managing Director of Liquid Ideas 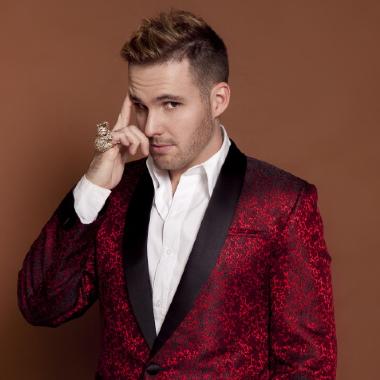