“Physical and vocal illusions that balance

SYDNEY MORNING HERALD
With over 20 years of experience, Raymond Crowe is one of Australia's finest and most sought after entertainers. In every one of his thrilling shows, Raymond delivers an intricately woven tapestry of magical artistry, cheeky humour, participatory comedy and fun.
Raymond Crowe is described as one of Australia's leading contemporary magicians. His innovative, fresh approach delights audiences both intimate and grand.

With his warm sense of humour, contemporary approach and highly skilled traditional techniques, Raymond Crowe invites us to impart on a journey that transcends belief in his Cabaret Show.

The popularity of Ray Crowe amongst his peers and audience is such that he was invited to become the first-ever Australian Magician to be on the now famous NBC TV special - 'Worlds Greatest Magic'. This 4th annual TV special was filmed before a live audience at Caesar's Palace in Las Vegas and includes what are considered to be the 20 greatest magicians in the world! The show was viewed by over 20 million people worldwide.

Ray Crowe was also a featured act for the toughest audience in the world - Ray received a standing ovation from 3000 magicians at the World Magic Convention 2003.

In his live show we see Raymond and his self-inflicted magic sprinkled with witty, charming comedy, fun audience interaction, participation and a sleigh of hand manoeuvres that have to be seen to be believed.

The show is a collage of Ray's most sought-after sketches that have amazed audiences both grand and intimate throughout the world.

Ray's unique brand of entertainment includes a fine understanding of the art of ventriloquism, which when tempered with Ray's gentle, good nature lets his 'volunteers' become the stars of the show.

The show would not be complete without what has now become his signature farewell piece - 'The Shadows'. It is one of Ray's most outstanding works and often literally has the audience laughing in tears.
Corporate entertainment taken to a new level: experience the unique world of Raymond Crowe

Not many people have moved Queen Elizabeth II to get out of her seat and give a standing ovation – but entertainer Raymond Crowe has. Raymond has earned a worldwide following for his unique work as an ‘Unusualist’ and delivers a dazzling combination of comedy, shadow art and magic. He is remembered long after his act finishes for his ability to take traditional variety skills and give them a modern edge with a hint of irony.

He is without doubt one of Australia’s most valuable exports and is highly sought after for his ability to move people from all ages and walks of life. When Raymond’s hand shadow work to the tune of Louis Armstrong’s What A Wonderful World found its way onto YouTube, it attracted millions of hits and earned Raymond an instant global fan base. This led to headline acts in Las Vegas and appearances on talk and variety television programs around the world, including the David Letterman Show and the Royal Variety Performance.

In the biggest compliment of all, after watching this infamous routine the song’s co-author George David Weiss sent Raymond the sheet music with a hand-written note addressed to ‘the world’s most wonderful puppeteer’. Raymond also had the honour of being chosen by his peers as the only Australian on the list of the world’s Top 20 Magicians and continues to leave audiences around the world gasping in wonder at his artistry and deeply creative mind. He’s received accolades from US comedian and actor Steve Martin, and closer to home Australia’s renowned musical quiz show Spicks &Specks recently chose him as the show’s best ‘End of program’ entertainment of all time.

Raymond also learned this year that imitation is the sincerest form of flattery when his famous routine was copied by a contestant on Thailand’s Got Talent. This attracted national media attention in Australia, with Today Tonight running a story on Raymond’s reaction.

Raymond continues to rise, with performances already clocked up in Rome, Athens, Fiji, Singapore, the US and New Zealand. Over the past few years Raymond has taken his show to country Victoria and far North Queensland, finishing up in Mackay/

Gold Coast and performed at high profile corporate functions in Perth, the Sunshine Coast, Melbourne and the Blue Mountains– all in one week!

Why Raymond Crowe’s act is so popular for corporate events:

His performance provokes a variety of emotions. Raymond’s act translates extremely well to  corporate functions due to his ability to reach people on a number of levels through his cheeky but subtle humour, ability to tug at people’s heartstrings, gentle audience participation and the unadulterated fun he delivers.

He takes his audience on a journey. Raymond  has proven time after time his ability to transport the audience away from the world of deadlines and targets and leave them energized, uplifted, and often deeply moved.

His show works equally well for small or large audiences. Raymond is as comfortable performing for intimate gatherings as he is in front of thousands of people and can tailor his show to be 10 minutes or up to an hour in length. His signature piece “The Shadows” can be performed anywhere from a small room to the side of a skyscraper (see this being done here).

When Raymond borrows a sports jacket from an audience member and brings it incredibly to life, shocked gasps are always heard regardless of the audience size. Raymond is able to tailor his performance to suit product launches, award ceremonies, gala night entertainment or corporate team building exercises.

The opportunity to offer access to a world class act. What better way to show employees they are valued than incorporating an entertainer who is known as one of the very best specialty acts from around the world?

No complicated AV requirements. Raymond’s set up needs are extremely simple which takes the pressure off behind the scenes.

“Raymond Crowe is a real talent. I’m not used to that- I work in television.” Shaun Micallef

“Thanks Raymond- that was just wonderful.” David Letterman

“He is our favorite Unusualist”  Adam Hills - Spicks & Specks

“I love your stuff.”  Steve Martin

“What a refreshing entertainer. After a long day of power point presentations and various business speakers, Ray gave everyone the opportunity to laugh out loud. His work with the audience was fantastic –fun, clean and so entertaining.The shadow puppetry at the end was absolutely mind-blowing.Put simply, Ray was awesome. ”  Sensis

Why The Unusualist is so popular for corporate events:
­
He’s incredibly unique – audiences have never seen anything like it. He creates wonderment, entertains, energises and moves people.

It’s clean comedy – witty, charming and non­ offensive; it’s a stylish performance suitable for all ages and types of people.

­The show is interactive – brilliant for creating audience participation and high engagement.

He’s versatile – Raymond can tailor his act to suit any occasion such as a product launch, award ceremony, conference, Christmas party or gala night; and is just as comfortable performing in an intimate venue as he is to an audience of thousands.

He’s easy to work with – professional and friendly, he also doesn’t require any complicated AV requirements

A world class act – an iconic performance from a well­ known entertainer; Raymond is sure to impress any employee, client or guest. 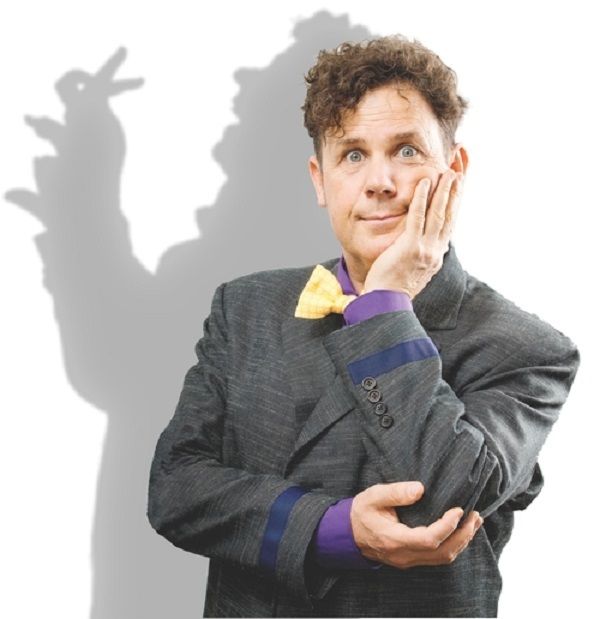