Watch the video for a true taste of the show!
Comic Magician, Stephanie Lee-Harper, takes on the role of "Emma Wits", a rather naive air hostess that just doesn't know when she goes too far. This comedy stage magic show in a word is "delightfully cheeky." A little lady, posh British accent who errs on the side of political correctness. All jokes are non-racist and contain no swearing.

Get everyone laughing at this show. Great for light relief at Xmas parties, Corporate functions or dinner parties, This Comedy Stage Magician is based in the Brisbane and Gold Coast area.

When to book a Comedy Stage Magician:

Brisbane Comedy Stage Magician, Stephanie, has performed for a variety of corporate functions where the aim of the night is to make certain that the clients at the event can let their hair down. A usual comedy stage magic show lasts between 20-30 minutes. This Brisbane magicians comedy stage show is full of audience participation and interaction which leaves a memorable mark on your event.

With seven years experience as a close up magician and an Honours degree in Performing Arts and Advertising, roving magician, Stephanie, can tailor her comedy stage magic show perfectly to suit any occasion providing a fun and memorable experience for all.

Before emigrating to Brisbane, Australia in November 2008 Stephanie Lee-Harper was consistently recognized as one of England's top lady comedy stage magicians. Stephanie is also a member of The International Brotherhood of Magicians and also a member of the prestigious Magic Circle in Portsmouth and has won many awards for her ability to mix a wonderful concoction of magic and humour to create the perfect corporate and wedding entertainment. 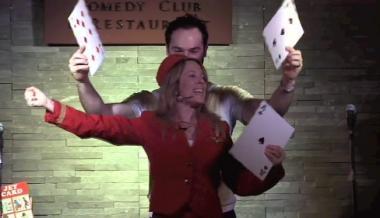