Who gets to invite a real wizard to attend their birthday?! Wizz Bang the Wizzard appears with a flash of fire and entertains everyone with his amazing wizardry skills, the sorcerer’s stone, the ghostly rope, magical creatures, the flight of the Phoenix , mind reading, the cloak of Invisibility and the Cauldron of Fire. See amazing magical feats and hear stories of dragons and fairies.

WizzBang captures the imagination of children and the adults alike and leaves the party in a puff of smoke and a lasting memory of adventures and wonders of the age of dragons.

The Wizz Bang Magic Show is designed to entertain the whole family. It can be either a traditional magician with top hat and vest or Wizz Bang the Wizard in full costume and stories to tell. The Show is tailored to the needs of the client and the age of the children. The Show includes both adults and children during the act with the finale involving the star of the show, usually the birthday child.

The Wizz Bang Magic Show includes special effects, music, balloons, magic that surprises both adults and children and a special appearance of a real live rabbit.

A lifetime of performing magic for children and an active member of the Australian Society of Magicians. My clients include Saab Systems, Ahrens Engineering, the Pagan Society, Primary Schools and hundreds of happy families in South Australia . Shows as far away as Los Angeles, London, Stockholm, Sydney, Melbourne and Alice Springs .

I’ll leave it up to the kids to have their say through the many letters I receive.

“You’re the greatest wizard in the world” Benjamin (6)

“Mum bought me a rabbit just like yours” Monique (8) 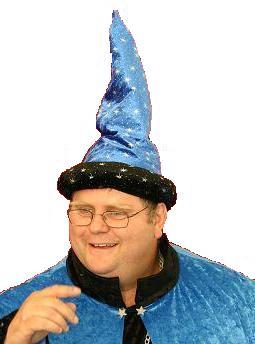