This character speaks for itself without saying a word!

Whether it is a French-themed, black tie event or just a cocktail party, a mime offers a touch of class and lots of laughs.

This character is able to accommodate to any level of involvement that you desire.  If you want more of a image rather than mobile, individualized attention Mime is a great character as a statue.  A Mime character is readily recognizable and suitable for all ages.

I have been performing either in the ring, on the stage, for private parties and cooperate events for 20+ years.

I have trained with coaches from Russia, Mongolia, France, Argentina, Australia, and the USA. I have a wide variety of skills as well as characters that I perform. Some of the major shows that I has been fortunate enough to perform with are:

I have also performed headline acts and roving entertainment for major events such as:

and countless private events in clubs and venues across the USA, Hong Kong, South Pacific and Australia. 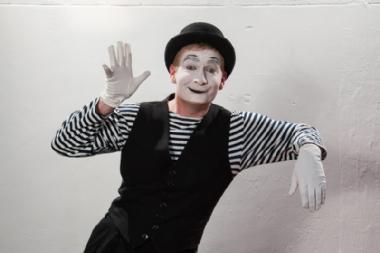