Louise Kennedy – Queen of the High C's. As seen on Australia's Got Talent

Few would expect an hilarious stand up comedienne to also be a celebrated opera singer.  Nor is it likely to find a gifted dramatic actress, engaging storyteller, inspiring corporate speaker and feted flatulence expert all in one person.  BUT, if you WERE looking for all that in one person… your search is over.

As seen on Australia's Got Talent 2013 Louise is a Diva with an irrepressible sense of fun and an ability in one moment to make fun of the art form she loves, and in the next moment deliver a serious song which will touch your heart.  Her warmth of personality and her ability to make fun of herself make opera accessible to those who have never listened to opera before.

But Louise's repertoire isn’t confined to Opera – few voices can carry the pain and poignance of blues, the playfulness of jazz or the yearning emotion of a love song quite like Louise.  Whether singing acapella, with backing tracks or in front of a full orchestra, few artists can thread an audience through the emotional range Louise brings into a room.  She will sing an aria while at the same time dissecting the absurdity of the story, making it accessible… and hysterical.  She is a flexible performer who can deliver a 15 minute to 45 minute show and has a range of beautiful songs to enhance any event.  You will be entertained.  You will laugh.  You will cry… your face will be wet.

Louise started her career by winning a scholarship to attend the prestigious National Opera Studio in London and made her professional debut at Glyndebourne as Zdenka in Arabella.  From there her career blossomed from performing for all the major Opera companies in the UK to becoming an international performer.

She was first introduced to international audiences when she recorded the Queen of the Night’s aria for the soundtrack of Amadeus with Sir Neville Marriner and the Academy of St. Martin in the Fields.

She has performed on some of the best stages in the world such as the Royal Opera House, the English National Opera, the Metropolitan Opera, the Teatro Regio, Parma, and has sung in many European countries and also in South Africa, Australia, Hong Kong and the USA.

Louise became known for her ability to sing contemporary opera, the sort where, as she puts it, 'you pick a note, any note and sing it and no-one would know the difference!' She was renowned for singing these stratospherically high and difficult roles with ease and accuracy.

Louise has lived in Australia since 2001. She has performed regularly with the Queensland Pops Orchestra in Brisbane and is in demand for recitals, concerts and private functions on the Sunshine Coast where she has made her home.

Louise Kennedy sings straight from the heart. She is captivating to listen to and gives me goosebumps each time I hear her sing. I love her ability to make me laugh one minute and then feel raw emotion the next. Louise takes you on a beautiful journey each time she performs.  Tania Nash

Rarely do you find amazing singing and comedy talent so well packaged and with such a big heart. Louise Kennedy delivers opera with such beauty and comedy with such innocence….combined it is a magical, hilarious event that touches us in places we didn’t know existed.  Deb Field - Director at Creative Coaching

I am writing to endorse the skills and talents of Louise Kennedy, Opera Singer, Comedian and Vocal Coach. I have been privileged to have Louise perform here numerous times in the wonderful acoustic at the Tree Frog Gallery at Maleny. Louise is talented, funny, kind hearted, genuine and totally reliable and will deliver whatever is asked of her. Louise gave her time to sing at a charity event I organised last February. She also conducted a “Singing and Laughing” group for a period of time each Thursday in the gallery space. That was until she became busy with the excitement of performing on Australia’s Got Talent! Louise has also performed here for a few other events, each time at which she has “brought the house down!” I can’t express just how much enjoyment I, and others, get from listening to Louise perform. She is a gem! Heather Gall Director- Tree Frog Gallery, Maleny

Louise sang to great acclaim in popular concerts in South-East Qld which were produced and directed by Colin Harper, AM MBE and the Qld Pops Orchestra. She excelled in singing music from the Viennese repertoire and British music by Ivor Novello, her soaring high notes and bright personality thrilling audiences. Wendy Harper

At our housewarming party, Louise Kennedy gave us a repeat performance of her Australia's Got Talent Audition. To the absolute disbelief (unexplainable talent) and joy and applause of everyone there. Shaune Clarke 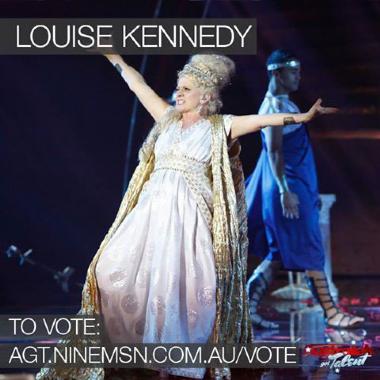