The Pianist and The Diva

The Pianist and The Diva features the stunning young pianist Stefan Cassomenos and golden-voiced soprano Tania de Jong. The show blends virtuosic playing and singing with humour, interaction and a touch of seduction. Repertoire ranges from Bach, Chopin, Rachmaninov and Mozart to Puccini, Piaf, Gershwin and Lloyd Webber.

Stefan Cassomenos - Pianist
Stefan  is in fifth year, doing Music and Law, on a Faculty Merit Scholarship, majoring in Performance (piano). He now studies with Stephen Mclntyre at the University of Melbourne. In 2004 the University awarded Stefan the T Allan McKay Piano Scholarship and a Faculty of Music Lunch Hour Series solo recital, and in 2005 awarded him the Ormond Exhibition, and the Florence Menk Meyer Prize. Also in 2005, he was a semi-finalist in the Lev Vlassenko Piano Competition Australia. In 2006, he was a finalist in the Australian National Piano Award,  won the major prizes at both the Dandenong Festival and the Wollongong Eisteddfod, and was awarded the Ida Doubleday Bequest Recital, by the Music Lovers Society.

In 2008, Stefan will travel  on scholarship to the British School at Rome.  Other upcoming engagements include a 2008 recital for the British Music Society, performances as a member of The Yarra Trio and with Tania de Jong in the new production, The Pianist and The Diva.

'alive, passionate, and dramatic ... as if the pianist's life depended on it. This was a prodigious London debut by a formidable talent.'  Musical Opinion UK

Tania de Jong is the inspiration, co-founder and artistic director of the internationally renowned singing group Pot-Pourri . A graduate of the University of Melbourne (LL.B. Hons.), and the Victorian College of the Arts (Opera, Music Theatre and Voice), Tania is considered one of Australia's most talented sopranos who has performed as a soloist with various opera companies and orchestras. With Pot-Pourri she has toured overseas on 35 occasions and released 6 CDs.

In 2006 Tania received the Ernst and Young Australian Social Entrepreneur of the Year Award for her work with The Song Room. The Song Room, a charity founded by Tania, has brought music and performing arts programs to over 90,000 disadvantaged children and communities throughout Australia. Tania’s other awards include the "Outstanding Individual Contribution to Australian Culture" (1998) and the Accessibility Award in The Melbourne Awards (2005). She was a finalist in the Telstra Business Women’s Awards (2001) and studied overseas on a Churchill Fellowship in (1996). She has recently been inducted into the AGSE Entrepreneurs Hall of Fame. Tania is also on the Board of The National Research Centre for the Prevention of Child Abuse.

"Thank you for your magnificent performance for our major Jew 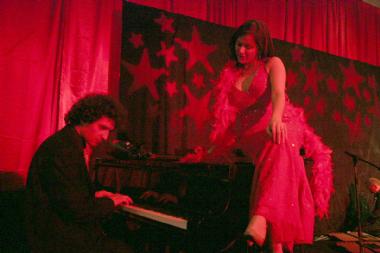