A THREE TENORS SHOW WITH A DIFFERENCE

Not only do they look like the real Three Tenors – they can sing! And what`s more; they can entertain! Beyond 30 years of experience. This is a Cabaret Show like no other. Three great voices singing the most noted songs of the century. From the ever popular operatic arias to English, Spanish and Italian Classics and also modern songs and ballads loved by all. The Three Tenors Tribute Show without doubt, performs the most Versatile, Sophisticated, Heart-felt Repertoire that any Show could possibly present in 2 hours. A truly great Show, performed in an environment of humor and dialogue by professional singers who enthrall and captivate their audience.
Comments like the following have been received after every performance:
“The best show I`ve seen in a long time”.
The Three Tenors Tribute Show travel and perform all over Australia and New Zealand. Enquiries have been received from Las Vegas, Asia and Athens.
If you would like to share in the magic of the Three Tenors Tribute Show and treat your audience to a night that they will never forget, ring or e-mail requesting whatever information you might need; list of credits, repertoire of songs they perform, photos, etc.
There is no other show like The Three Tenors Tribute Show.
THE EVOLVEMENT of the “THREE TENORS TRIBUTE SHOW”
Angelo Falcone, a most competent Cabaret Artist and a “Pavarotti” look-alike, has performed as a Pavarotti impersonator for some 12 years.
Three years ago, with the support of the Lions Club of Forest Hill, Angelo decided to do a Charity Concert at the Nunawading Arts Centre to raise funds for the Paraplegic and Quadraplegic.
Through conversation with Sandro Martino and Vittorio Sacca, two long time friends of 20 years, and also singer/entertainers, Angelo stumbled on the fact that their combined likeness to the real three tenors was remarkable; so he decided to ask them to join him at the Concert to sing some arias and a couple of classics. Well, the audience response was quite unbelievable; they were thrilled.
As a result, the “Three Tenors Tribute Show” was surprisingly launched. Since then, the “Show” has pleased a lot of people; from as little as 20 at a private Corporate function to the mass of 40,000 at the M.C.G. Sandro has recently retired and his replacement is a great tenor - Lawrence Allen . Angelo, Lawrence and Vittorio, are professional singers with years of experience as entertainers.

Angelo Falcone is an accomplished compare/singer/cabaret/entertainer. He has been involved in hospitality as a restaurant owner and chef for 25 years. His career in music began while in his early teens and through tuition in modern and classical singing, he developed a very flexible style, enabling him to tackle a huge variety of music. In his early years as a singer, he was the front man of an international group. The experience as a singer/entertainer led him to other areas such as professional comparing and even acting. Solo Cabaret Performers roles became second hand. His versatility extends from light jazz and rock `n roll, to evergreens, classics and arias. Angelo is the closest known Pavarotti singing look-a-like in the world and has impersonated the famous tenor since 1994. Angelo launched the “Three Tenors Show” in 1998, and since then speared another 7 “Shows” which perform around Australia. The “Music of the Night”, “Classico”, “Around the World”, “Pavarotti Live”, “Pavarotti meets Elvis”, “Pavarotti and Friends”, and the “Many Faces of Angelo”
DOMINGO {Sandro Martino –Retired after 10 years, in February 2008}
Replaced by {LAWRENCE ALLEN – Joined full time in March 2008}
Lawrence Allen studied music at the Melbourne University Conservatorium of Music and the Victorian College of the Arts. In 1980, he continued his studies in London with Eric Viether and Geoffrey Parsons, participating in a series of BBC televised master classes given by Elizabeth Schwarzkopf. His overseas work included appearances with the English National Opera and Chelsea Opera, London. Since returning to Australia he has performed with the Victorian State Opera, the Australian Opera, the Western Australian Opera and also the New Zealand Opera. Lawrence has sung under the direction of noted conductors, such as Sir Charles Mackerras, Mark Elder, William Reid and Simone Young. He continues to be in demand as an opera and concert performer. He absolutely loves the light humour cabaret style performances with the “Three Tenors Show”.
CARRERAS {VITTORIO SACCA}
Vittorio Sacca studied classical singing in Italy and continued his studies at the Conservatorium of Music in Melbourne. Over the years, he supported many Italian artists at some of the major Italian events, and has enjoyed singing a variety of styles. An excess of 30 years of entertaining has earned him much respect and admiration from both the Australian and Italian communities. He is now enjoying his participation as “Carreras” in the “Three Tenors Show” immensely.
GIANNI TURCIO{MUSICAL DIRECTOR}
Gianni Turcio was born in Capri {Italy}. He followed in his fathers footsteps to become a very accomplished pianist, arranger, producer, musical director and teacher. He holds the Associate and Licentiate Diploma in Pianoforte. He has accompanied the cream of Australian entertainers as well as overseas artists. Adding to television work, playing in many film sountracks under the direction of acclaimed composers and various musical commitments, he now, enjoys his part as Musical Director of the “Three Tenors Show”.

SOME OF THE CREDITS 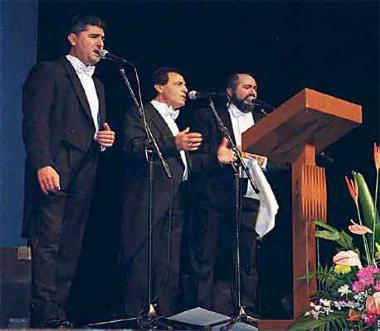