BiGlittleGuy are an entertainment based, crowd pleasing duo who work acoustically for both indoor and outdoor occasions. The duo features the talents of Enio Pozzebon and Dave Wayman. BiGlittleGuy specialise in varying approaches to well known material from Rock and Aussie Folk to Popular Italo/English songs. They have three personas: "BiGlittleGuY", "BiGlittle PaeSaNos" and "BiGlittle DownUndeR" all this done with two voices, a ukelele and a accordion! Enio from his experiences as musical director and sound designer for musical, cabaret and theatre productions (KEATING! The Musical, NICA, Tom E. Lewis, Colour Me Films) and as a performer (Casey Bennetto’s The Drowsy Drivers, Polyglot Theatre, BELLA CIAO, BiGlittleGuY), diversity is a vital element of Enio’s career in the performing arts. Dave is a singer, songwriter, performer and musician of vast experience. As a performer and writer Dave has worked in cabaret, major venues, corporate events, television, hotels, weddings and even as a roving minstrel. Dave has produced and worked on over twenty CD's, co-written stage shows, written radio and TV ads, produced and delivered songwriting workshops and courses. 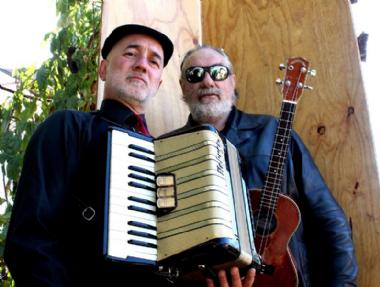