Stan & Ollie brings back the famous comedy duo to the 21st Century suiting Hollywood themed or black-tied events, or even surprsie a silent film fan.

Show can be performed with either pre-recorded music or live music accompaniment - Just like in the days of silent films.

Stan & Ollie have performed at various venues such as:

Wether as meet & greet, roving characters or a show, Stan & Ollie will leave the audience in stitches!

With a career spanning almost 20 years, Rod Lara has been hailed as a "Master of physical comedy and characterization". Rod strives to push the envelope with his unique brand of comedy, utilizing the skills of physical comedy, circus arts, mime and dance. He may perform in silence, but it's the audience who are left speechless!

Trained in the circus arts, as well as holding a degree in Film & Television from the Victorian College of the Arts. Rod's knowledge in these fields has helped in undertaking his very own prolific productions.

In 2012, Rod produced, co-directed and performed in "Top Marx: The Ultimate Marx Brothers Revue Show". The show toured for a year with great success.

He has recently written and performed "Last Mime Standing" for both the 2014 Melbourne Comedy Festival and 2014 Melbourne Fringe Festival with great reception from audience and critics alike.

Rod is also one half of "The Oddities", who channel old style vaudevillian performing. A musical extravaganza of opera, physical comedy and mime.

Rod other credits include performances for Opera Australia's many productions, such as "A Streetcar Named Desire" (2009), "Midsummer Night's Dream" (2010) and "Carmen" in 2014. He has also made regular appearances on television, including the "2013 The Great Debate", "Jumping Jellybeans" and numerous commercials - most notably "Old El Paso", "BullHorn TP" and "Carlton Cold".

Brett Danalake has been performing, writing and/or directing for more than 25 years. Brett is a founding member of Ferknerkle Productions and has written, directed or acted in (occasionally all three) plays with such interesting titles as ’Play Removed Due to Legal Advice’, ‘The Entrée Was Death’, ‘It’s Not You’, 'Hot For Frida', ‘Invasion From A Planet With No Special Effects’, ‘You Are Here’, ‘Sci Fi Fo Fum’, ‘Caught In The Web.Com’, ‘With This Ring, I Thee Dead’ and ‘Sit on My Facets’.

Brett is a member of the Melbourne Night Owls, the Australian tent of the international Laurel & Hardy appreciation society, the Sons of the Desert so is thrilled to be able to celebrate the legacy of these classic performers. 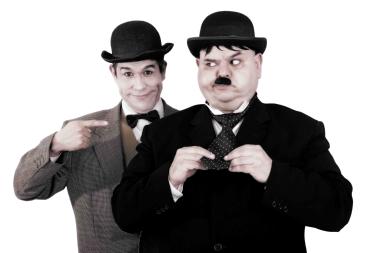