music, whilst dressed in Real Drizabones.  This concept works exceptionally

Australia is the wide brown land,

So why not book the Big Tall Band

Looking for some real Aussie Atmosphere?  Dressed in real Drizabones, and

sporting bush hats, these tall cockies, add a real Aussie flavour to any

event or promotion.   Whether walking around simply as characters, or

playing great Aussie tunes, this group of up to 4 performers make cultural

cringe a thing of the past!

Perhaps you need someone to meet and great, or to hand out merchandise.

Maybe you need to entertain crowds d with a game of ‘Name that Tune’, with

some requests handed in

Australia, and the Centenary of Federation Celebrations, and major

… Tunes From Aussie Children¹s shows such as Bananas in Pyjamas

… Australian TV Theme such as Skippy, and Neighbours. 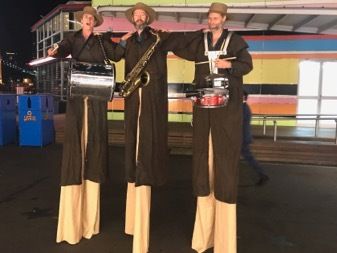