Do you want to be thrilled by world class performers? Do you want to be mesmerised by the hypnotic sight of high class jugglers whipping their wares? Are you after a spectacle that has to be seen to be believed? Do you want your audiences doubled over in laughter from tantalising tomfoolery!? If the answer to any of these questions is yes then look no further the aviators have been cleared for landing!

As well as being world class pilots the juggling skills employed by these whirlwind travellers are second to none! Watch as 5,6 even 7 clubs float effortlessly between these two pioneers of the sky. Always keen for a chat, the Aviators have a unique style of improvised comedy that is sure to leave your patrons in stitches.

Coming to an event near you the aviators are clad in a blend of classic 20s era aviator threads, and have been upgraded with futuristic flying systems. After being separated from society for so long they are keen to research the local population and share with them the knowledge they have acquired in their travels. Night flight compatible the aviators can be lit by an intricate system of led lights and other worldly technology. Stereo systems have been built in and can broadcast whatever music suits the occasion. The thrusting systems built into the wings double as juggling clubs. These juggling clubs create the illusion of a propeller system and the aviators have been known to engage in dogfights with pass juggling.

Not only do the aviators look amazing they are operated by highly skilled circus performers who have performed all over the world. From the dusty deserts of Australia's red centre, to the hustle bustle of the city of San Francisco, through to the concrete jungle of Shanghai! These guys have performed all over the world to a variety of audiences from all walks of life. They know how to read an audience and situation at the drop of a hat, after all everybody laughs at something! They are among the best of the best and are a hard act to follow!


"The Adaptables have been the best entertainment act we’ve booked for a client activation. They were extremely professional and efficient to deal with, and developed a fantastic rapport with the clients themselves.
Aside from this, their performances were so unique and skilled, and truly engaged with our audiences. I would recommend their services to any client, from a corporate launch event to private party..we can’t wait to use them again!" Lauren Trevenen – The Event Space 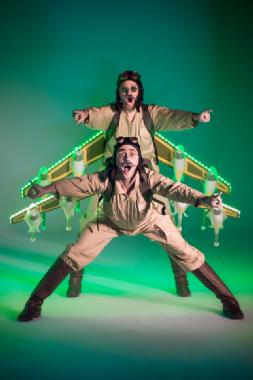