The Concept
The initial idea for The Peppers Pep Band grew out of the 65 piece 'Expo City Marching Band' in 1988. Out of that band emerged the 16 piece Pep Bands which became so popular with World Expo 88 visitors. The Pep Bands originate from the USA, where they perform at Pep Rallies, which are designed to really get the crowds excited.

The Line-up
The seven' piece Band includes saxophone, trumpets, trombone, tuba/sousaphone, snore drum and bass drum. The added colour and impact of quads (4 drums) is also available upon request. All of the drums are worn on specially designed fibreglass harnesses, which allow the Band complete mobility. The Peppers Pep Band consists of several ex-Expo musicians, as well as fresh new talent, and this combination of experience and eagerness has proven most successful.

The Show
The Band performs energetic, fully-choreographed routines, to all of your favourite songs, with comedy playing a major part in the show. Some of the numbers include: Rock Around the Clock, Hawaii 5-0, Peter Gunn, Susudio, Jesus Christ Superstar, Turn the Beat Around, Spinning Wheel, Wipe Out, 25 or 6 to 4, Heartbreaker and Tequila, through to The Limbo, The Chicken Dance and Teddv Bears Picnic!

The look ...
The Peppers Pep Band are known for their bold black & white check pants, which are worn with white polo shirts printed front and back with their name in bright colours. Black baseball caps, white shoes and colourful bum-packs complete the look. When required, the Band is able to wear a variety of different coloured shirts, depending on the theme colours. They adapt the costumes to suit the event or venue.

Sponsors ...
In the event the function or venue is supported by major sponsors, the Band can arrange specific theme songsljingles, which can be incorporated into the show. Also, sponsors' merchandise can be worn by the performers (if suitable), or given away as prizes. 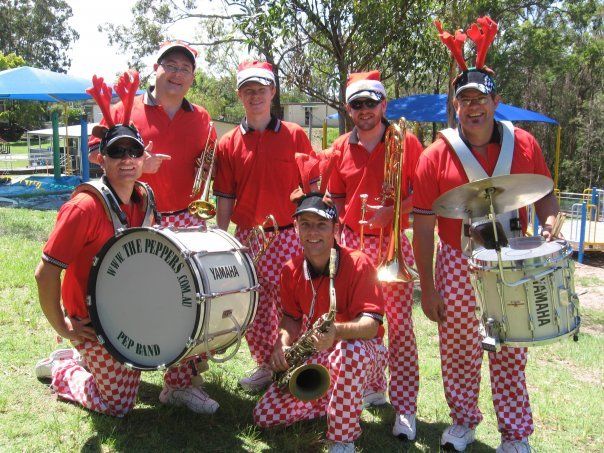