Pyrorhythmic is a journey into a world of pounding rhythms and sensual fire.

Pyrorhythmic has thrilled audiences for over a decade, presenting 1000+ spectacular fire shows for many of Melbourne and Australia’s top events and venues. This professional fire show has gained a reputation not only for it's high energy, high impact performance; but also for the attention to production and especially safety.

"A heady mix of danger, beauty, artistry and freakishness"- The Age

Pyrorhythmic harks back to the early days of the shows performers when the founding crew would organize huge beach parties that attracted pyros and drummers from all over the state. This amazing vibe and feel was captured by Pyrorhythmic and brought to the general public we it's been a consistent hit. And no wonder, with a selection of the finest African, Afro Cuban and Arabic drummers in the country and a stage show only these pyro pranksters could create.

If it's fire you need, then look no further...Pyrorhythmic is the oldest, the biggest and the best. Here's why:

As you can see, Pyrorhythmic has gained an impressive client list, a high profile and an unblemished record that similar shows can only dream of. And most every event and venue can host this dynamic fire show.

For some the Pyrorhythmic experience is one of beauty and amazement; for others, it's one of adrenalin and energy; but all would agree on the fun factor.  Pyrorhythmic is unashamedly loud, "in your face", and a little hard to ignore. Just what's called for to start a party anywhere, anytime. 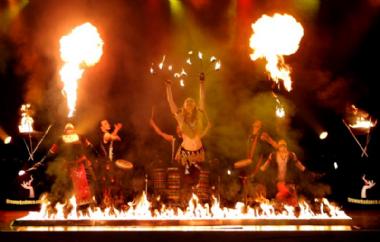