Witness some of the most spectacular illusions ever seen. A presentation that has the reputation in the entertainment industry as being the most dynamic and breathtaking productions staged in Australia. Combinations of State-Of-The-Art lighting effects, powerful music and dance, beautiful exotic birds, gorgeous assistants, cutting edge magic, futuristic hi-tech illusions, hilarious audience interaction and the most incredible dare devil stunts ever seen by a magician.

This exciting show and intriguing Australian & International Comedy Magician is sure to bring wide eyed entertainment to your next special event.He is power of the Super Natural,a Grand illusionist and a witty personality wrapped up with danger,comedy and action that will thrill and excite you Guaranteed!!

Brendan Mon Tanner specialises in everything from Roving Magic,hilarious standup comedy tospectacular Grand Illusion entertainment.Brendan has a variety of shows perfect for you.You can choose from a small to large comedy show, roving magic from group to group, table magic or even a Las Vegas Grand illusion show complete with dare devil assistants,dancers.pyrotechnics and mind blowing cutting edge illusions and stage sets.Brendan Mon Tanner with over 28 years of experience will especially tailor make and customise The very best segments that will guarantee results.Brendan Mon Tanner has performed in over 20 international casino shows around the world,he has also performed over 1000 Corporate shows, over 100 cruise ship shows and over 500 public shows. Brendan is sure to cast the magic of success over any corporate function or special event.

Brendan Mon Tanner's entertainment has  earned him 14 MO and ACE entertainment awards combined for best specialty comedy act and Variety Magic and illusion show and recently nominated for the ACE Award for outstanding Versatile Performer/entertainer of the year.

Brendan Mon Tanner is a Sydney-based professional magician, magic consultant,performer and entertainer with over 30 years of performing experience.Brendan performs his unique style of magic entertainment at corporate and special events,private functions and other exclusive venues not only across Australia but also internationaly. Brendan has impressed, entertained and amazed audiences in Australia,Europe and in the USA including CEO's, senior executives, politicians and celebrities.

Brendan Mon Tanner also works for Carnival Australia as a headline Comedy Illusionist and performs regularly on all Australian P&O and Carnival Cruise liners performing his mind-blowing magic show Magic To The Max with Fire eating and Illusions.

See Brendan Mon Tanner produce showgirls from nowhere, slice a person into three parts, shrink a human body to six inches, float an audience member into mid-air, breathtaking fire eating stunts, the removable head, adrenalin dance numbers, appearing animals. Plus more exciting and spectacular effects that will have an audience on the edge of their seats. Brendan Mon Tanner’s spectacular productions are always in constant popular demand in all major cities across Australia and overseas.

BOOK NOW FOR YOUR NEXT SPECIAL EVENT  DONT BE THE ONE TO MISS OUT!!!!

THE PERFECT FIT FOR YOUR NEXT BIG EVENT !

A Must See ! Perfect for your next Big Event !

In high demand for both corporate and private functions, Brendan Mon Tanner’s stand-up shows are fun, engaging, upbeat, and can be tailored to fit a wide range of audiences and events.Avoiding tired rabbit in a hat Tricks,Brendan creates the wow factor with his mind-blowing cutting edge magic, entertaining presentations, incredible dare devil stunts and audience interaction and participation that have a predominant role throughout all Brendan’s performances, everyone gets to be part of the show and share the excitement while having an unforgettable experience

SEE VIDEOS ON RIGHT SIDE COLUMN

‘Brendan Mon Tanner is the funniest magician i have ever seen,I couldn’t stop laughing you have to see it to believe it. Awesome show”
MATTI JOHNS. Triple M, NRL Footy Show

”Brendan Mon Tanner is a true entertainer,He is a true master of the craft.If your looking for entertainment for your next function then Brendan is the man.I have worked with Brendan over a dozen times at different functions and special events and he kills them every time,he is a great entertainer.
MARK GWYER. Grill Team, NRL Footy Show,Triple M

“What a Great Night of entertainment Brendan Mon Tanner was my Highlight of the night.He was Fresh,Modern,Very Funny and simply Amazing”
Kyle Sandilands. Kiss Fm 104.9

A big Thankyou for your Professional Magic Show,it was Fantastic.Hope to do more work with you in the near future”
2Day Fm Producer

“We love using Brendan in our live fat pizza stage shows as he kills the audience every time with his amazing dare devil magic and crazy stunts. He is a true professional magician a crazy comic and we love using him. He is one of the best magicians in the country” I fully recommend Brendan Mon Tanner”
TAHIR. Fat Pizza Houses

“A true entertainer in his field.It was a pleasure and a lot of fun having Brendan back againon my TV Show.The audience loved him and the magic was amazing”
KERRI ANNE SHOW

“I have Worked with Brendan over a dozen times with NRL dinner presentations and fundraisers and he always wins the audience every time.He is one of my favourite magicians and always gets the job done.Visually outstanding, a professional performance filled with style, charm and fun”.


“What can i say about this man? Brendan was the highlite on the ready steady cook programme,the chefs couldn’t concentrate on the cooking.It was one of the best shows we have ever done.The audience loved every minute.We would love to bring him back for another episode of madness”,
Peter Everett. Ready Steady Cook

“Congratulations to Sandra and Brendan for another A.C.E Award for outstanding entertainment.keep up the high standard and keep them Laughing”

“I have known Brendan even before we started the wiggles and he is one of the most entertaining performers i have ever seen.His magic is fantastic and his comedy has always had me in stitches.He is a true master of his game and if you are thinking of having a comedy magician for your next special event then you have to get this guy. When the wiggles have a few private functions i always use Brendan to spark up the Party.” 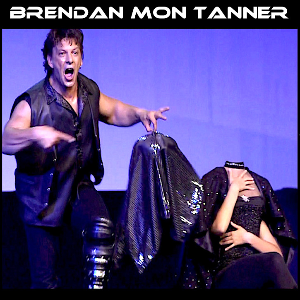