After ten long years in I.T. working for some of the most respected companies in the world (from IBM to Nat West, Coutts & Co. and Unisys),

Willis has extensive experience in every facet of the IT industry, from testing, PC support through to software engineering, programming and teenage video gaming obsession. Therefore, the log 3000 Gigs, 40 Festivals Later, Willis decided to attempt the impossible and write an entire comedy show about computers, and thus, the show “Control-Alt-Delete” was born, debut’d at Melbourne International comedy festival to rave reviews, followed up with a sell-out run at Edinburgh and Adelaide Fringe’s. Willis continues to perform his computer comedy show for corporate entertainment with the full power of an Intel Atom based processor.

The show is available in two guises, the original “Control-Alt-Delete” and an alternate version “PC, MAC and me”, both can be performed for audience members of all ages, with or without adult content on request. REVIEWS: “Dan Willis brings IT banter down to a level accessible to every audience in this brilliantly designed show” Three Weeks (Edinburgh) “Willis has brilliantly transitioned from programmer to comedian.” The Conversation.com “Very funny.

IT geeks will love it, and non-IT geeks will also love it.” ComedyFestival.com.au “Intelligent performer with impeccable timing” New Leaf Media “A story about one man’s and his machine, it’s as sweet as it is funny. And it’s very funny.” The Funny Tonne 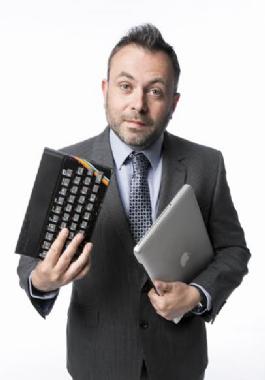