Sangre Gitana Dance Company commenced in 2000, choreographed and directed by one of Sydney’s most recognised flamenco dancer, Jesica Varela.

This Sydney based Spanish dance group specialises in performing the art of Traditional and Contemporary Flamenco dance.

Sangre Gitana performs form the soul that found in the depth of flamenco music. Their challenging repertoire, diverse range of dances and the colourful range of costumes seduce and captivate their audience, through sevillanas, pasodobles, tangos, and modern flamenco rumba. This group of made up of 30 dancers who have performed at numerous prestigious Latin American events, Sydney Restaurants, Wedding and Corporate Functions and RSL clubs.

Jesica Varela began performing professionally in 1996 at the Spanish Club restaurant as a flamenco Dancer.  At this time she also focussed on developing and her performance ability through drama and singing whilst undertaking a Bachelor of Art/ Psychology at the University of New South Wales.

As a freelance Choreographer/ MC  Jesica has presented the Bring it On Youth Festival at Fairfield showground from 2002 – 2004 and numerous Latin American events including the Argentine and Uruguayan Independence Days. 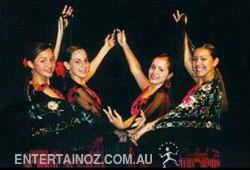