TV Celebrities Adam Francis (Strictly Dancing) and Alexander Bryan (Dancing with the stars) started dancing together in 2005. They were approached to go on among the Australian Broadcasting Corporations highest-rating shows, Strictly Dancing. Not knowing that they were going to be the biggest controversy on Australian Television at the time. Adam and Alexander were placed second in the TV show grand final. After the TV show, the pair are Australia's leading Showdance representatives to world events.

Adam and Alexander produce high-class routines with amazing costumes. Performing a fusion of Dance, Acrobatics and Fire pyrotechnics. Together they both share personal achievements and professional qualifications within the arts industry. With over 20 years of experience in the performing arts scene, Adam Francis has completed a Bachelor degree in Dance @ the Victorian College of the Arts. Majoring in Classical Ballet, Jazz and Contemporary, 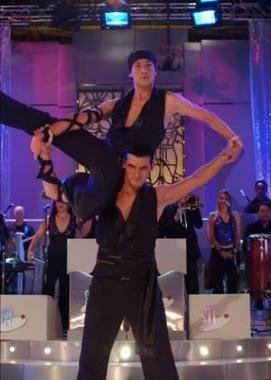