Played by Csaba Szirmai who was featured in the musical "Burn the Floor" in the US, He came 4th in the world representing Australia at the Salsa Congress in Orlando, He is a current dance teacher at the Sydney Dance Company and has done numerous Grease, Saturday Nite Fever pantomimes as John Travolta. He is the current champion in the ABC 'Strictly Dancing' TV Show and represented in the ADO World Hip Hop Championship. Recently he has also appeared on two series of “Dancing With The Stars” TV show in Channel 7.

He is an all round dancer/performer/entertainer. You can also see him as the featured dancer with his partner in the current NSW Tourism TVC showing nationally.  He usually performs with various hot female dance partners which could be anyone including  Luda, Athena, Sarah, Eliza or Maria depending on availability. .

He will encourage and get the party really happening and pumping and make the guests become the party people and play boogie on the dance floor. We currently have various items that can be used for the show.

The John Travolta Solo Show can consist of either:

...and the beat goes on, party, drink up, dance and celebrate! 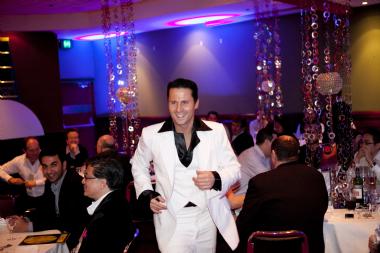