Winners of Australia's Got Talent.

Available through Entertain Oz for bookings.

Ask Entertain Oz about getting Justice Crew for your event

Entertain Oz is the booking agent for Justice Crew

Our vision is to encourage and inspire all people to reach and fulfill their dreams and to live life to their fullest potential. We are taking Hip Hop Dance to another level and to world…

Samson Cosray Smith
Samson is 22 years old, and is originally from New Zealand. He only recently moved to Sydney in 2007 and has been breakdancing for over 9 years. Ever since hes been in Sydney he has been introduced to other styles of dance such as Krump and hiphop!!! He has travelled to and toured around various countries including Germany, USA, HongKong, Australia and New Zealand dancing, performing and teaching!!!

Justice Corporate Team building
For hundreds of years dance manuals and other writings have lauded the health benefits of dancing, usually as physical exercise. More recently we’ve seen research on further health benefits of dancing, such as stress reduction and increased serotonin level, with its sense of well-being.
Then most recently we’ve heard of another benefit: Frequent dancing apparently makes us smarter. A major study added to the growing evidence that stimulating one’s mind can ward off Alzheimer’s disease and other dementia, much as physical exercise can keep the body fit.
Get Australias best Hip Hop Dance crew to help make your team smarter!
Justice provide fun inspiring and challenging team building workshops that can be tailored for your specific requirements.
Spend the day learning and growing as you come together to produce your companies own routine and dance together, in rhythm with yourself and with your team.
Take a Justice Dance workshop to challenge your mind. It will stimulate the connectivity of your brain by generating the need for new pathways. Difficult and even frustrating classes are better for you, as they will create a greater need for new neural pathways.
Dancing integrates several brain functions at once, increasing connectivity. Dancing simultaneously involves kinesthetic, rational, musical and emotional processes.
But above all else, dancing is great fun and makes you feel alive!
The Justice Crew includes Eman from So You Think You Can Dance and a team of motivated young athletes.
GET TO KNOW THE JUSTICE CREW
WITH THEIR FULL LENGTH DVD
“AND THEN WE DANCE”
IN STORES TODAY

On the back of the release of their debut single “And Then We Dance” Sony Music Australia is excited to announce the latest release from phenomenal dance troupe Justice Crew. Today a full length DVD of the same title “And Then We Dance’ will be available in stores.
The documentary style DVD goes behind the scenes and into the lives of 9 incredibly talented young men showcasing their talents, insane dance moves and inspirational stories.
“Most people are aware of the success Justice Crew have found but most people don’t realise where we’ve come from, how hard we’ve had to work to get here and where we want to go.” Emmanual Rodriguez said.
“I think the DVD captures our true personalities, friendship, and talents – audiences can expect to see a different side to the Justice Crew” Rodriguez added.
Hailing from the western suburbs of Sydney, Justice Crew won over Australian audiences when they entered and subsequently won the 2010 series of Australia’s Got Talent. Prior to their win, the crew struggled with financial hardship, broken homes and behavioural problems. Through dance Justice Crew turned their lives around and it is now their shared goal to change the lives of the younger generation through the Justice Academy – a facility offering free dance classes to under-privileged children.
Justice Crew are Lukas Wildrok, Omar Kamara, Samson Cosray Smith, Solo Tohi, Len John Ruela Pearce, John Len Ruela Pearce, Emmanuel Rodriguez, Paul Eric Merciadez and Anastasios Tass Repousis.
WINNERS OF AUSTRALIAS GOT TALENT
“AND THEN WE DANCE” THE DVD AND SINGLE ARE OUT NOW 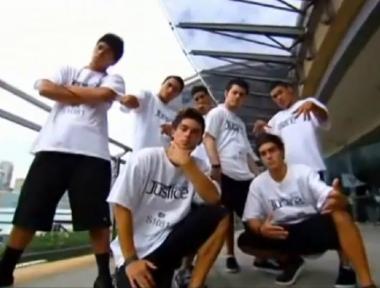