Witness the amazing talents of Skopalova ,skills with the Rhythmic Gymnastics apparatus, rope, hoop, ball, clubs and ribbon, provide a unique touch to her shows. She is an extremely versatile performer with styles ranging from Cabaret, Circus, Burlesque and even a Sports Spectacular.

Let Skopalova create an inspiring performance for your audience unlike anything they have seen before! Skopalova began her career as a Rhythmic Gymnast training in South Australia where she dominated the rankings year after year, being State Champion six successive years and SA Levels Gymnast of the year three successive years.

In 2006 she relocated to Melbourne to train at the Victorian High Performance Centre for Rhythmic Gymnastics and study at Deakin University. Throughout her Gymnastics career she was fortunate enough to train with many professionals from Europe including Valeria Vatkina, Junior European Champion and 2000 Olympic finalist. After 12 years training as a Gymnast she decided to use her talents in the dance arena and pursue her love of performing. 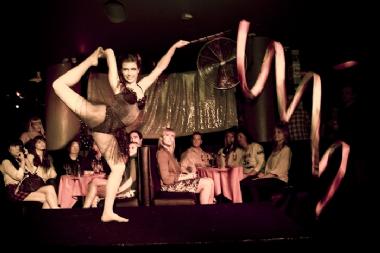