The dynamic duo of Steve Maltez & Kelly Ann Doll have been a force for quite some time now and constantly perform both in their own country and around the world. Specializing in “aerial dance” within the form of Salsa, this has given them the reputation of one of the most amazing, daring, death defying aerial dance acts anywhere! Steve Maltez has been personally taught by some of the worlds best aerial salsa performers such as Alex Lee & Chi Li (USA), Dave Paris (USA), Pablo & Diana (USA), Carlos & Eli (Australia) & Lenny & Mio (Australia). This has given him the insight to be able to teach aerial workshops where ever he performs due to the knowledge, skill and imagination he now posses. His tricks are “truly amazing to watch”. He has been dancing the style of salsa for over 6 years now and was personally trained by the world renown “ Sharon Pakir (Spin City Dance Melbourne Australia) where he has achieved the status of being the “2009 Victorian Australian Salsa Cabaret Champion”.

As for his partner, Kelly Ann Doll, a girl without any fears probably sums her up the best ! Just by watching her amazing aerial lifts, twists and dives, will leave you wondering how did she do that ? A full time swing dancer, actress, model & burlesque performer and 16 years of being an Australian Rock N Roll/Swing Champion has made her one of the fastest female rock & roll dancers in the world. Now setting her sights to take over Australia in the salsa scene, audiences that have seen her salsa performances so far have said "she makes me exhausted watching her, but I don’t want her to stop and footwork so fast it makes your head spin, I want to see it again and she never misses a beat"…

Some of her achievements include,

1995 - 2004 Australian Rock & Roll, Swing, Aerial Champion, performances in Hong Kong & Singapore as well as the Sydney Olympic Games in 2000. This dynamic duo has performed in numerous television shows, cruise ships, dance congresses and most recently competed in the world Salsa championships in Athens Greece. Steve & Kelly can choreograph a show for the smallest of clubs to the the largest of festivals. Extra dancers / live entertainers can also be added to increase the shows spectacular appearance in any dance style required ( from Brazilian to Ballet ) they will cater to suit your needs..... Past performances include, THE MALAYSIAN SALSA CONGRESS 2008, THE NEW ZEALAND SASLA CONGRESS 2008, THE SYDNEY SALSA CONGRESS 2006,2007, 2008, 2009, THE MELBOURNE SALSA CONGRESS 2008, 2009, THE SYNEY OLYMPIC GAMES 2000, THE ATHENS GREECE SALSA CONGRESS 2009, THE NEW YORK SALSA FESTIVAL 2008 7 THE HAWAII SALSA FESTIVAL 2009. Just to name a few....... The S-K PROJECT is truly an act not to be missed ! 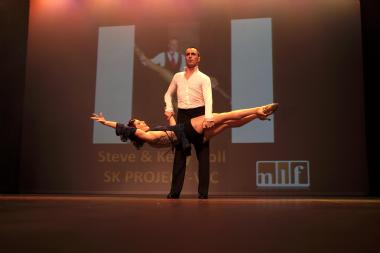