You can try to recreate or perhaps even re-live your favourite Hollywood Movies with some of the spectacular street fighting action for your special events by booking Fighters Flashmob which consist of real professional fighters both male and female.

Imagine having your guests gathered in a particular open area at venue when all of a sudden BOOM a fight breaks out and everybody steps back watching the action basically freaking out without knowing what to do and watching some incredible fighting displays between males and females. Then when you least expect it a winner is determined and it is revealed to your guests that they have been pranked by a fighters flashmob.
Imagine having a client included in the scenario where for example a wallet, suit jacket or handbag gets snatched [acting of course] thus setting the scene for the action fight of catching the thieves. Or perhaps imagine having a couple of strangers offering you a drink at the same time hence causing a commotion until YOU declare that you will only accept a drink from the strongest and perhaps even dance together too but "They Must Fight For You Fist" to then create the biggest showdown in a wide circle while at the end your guests will realized that they have been gotten by you.
All performers are real professional fighters in real life and are trained in many different styles of martial arts including the hottest MMA together with tricking and even street hand weapons like sticks, knives, swords and numb chuckers where requested. Yes you can book the girls as well as the guys as they are all multi-award winning international champions in various fighting art forms.
Over the years Fighters Flashmob team members have performed at various red carpet film premieres for major Hollywood hit movies like "Charlies Angels". "Teenage Mutant Ninja Turtles", "Rio", "The Matrix", "Fat Pizza", "Bridesmaids", "Sucker Punch", "Mission Impossible II", "GI Joe II" and "The Last Airbender" just to name a few.
The beauty about their performances is that they can do it along to any background and any sounds or even to natural silence. No PA required.
Plus you can choose from any of your favourite movie themes and simply let us bring the razzle of the entertainment for you.
Or we can simply simulate any movie of your own according to your imagination.
TWO OPTIONS
1) Each featured performance is short, powerful and strong in length and content due to the extreme physicality required and then we can either vanish or assist moving your guests into the next segment of your function whether the dance floor or a specific formality. We are talking 15 minutes all up.
2) A longer booking call-time of 2 hours can also be achieved and worked out being in a situation where all the fighters perform in raised up high podiums and have numerous breaks on and off. Alternatively can also execute the traditional meet and greet welcoming
Both options are done and performed with safety stunts being paramount and second to none. Please also note that while all performers are real fighters everybody performs strictly as entertainment. You will be indeed booking the best real fighters that Sydney has.
Please take a look at our photo gallery to see a combination of various action and still photographs from some of our various team members.
All our fighters are also regular constant performers on television, films, music videos and TV commercials.
We look very much forward to working with you real soon. Why not flasmob and prank your guests?
Or if you do not wish to have a surprise flashmob then can just do a straight forward featured SHOW.

Imagine watching a live action movie right now to then suddenly realize that it is actually happening LIVE right now in front of your own eyes at this very exact second. This is what you will feel, witness and experience when you book Fighters Flashmob. 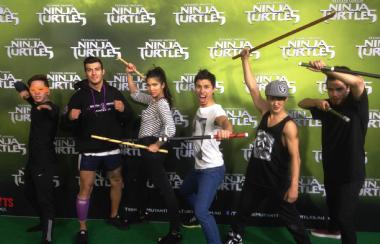