Adrien Nookadu has become one of the most recognized faces in Australia as one of the favorite contestants of the judges in the 2014 edition of The X Factor. The 17-year-old has been entertaining people since he was 5 years of age. He was most recently seen in The X Factor where he was eliminated in week three when he landed in the bottom two. The judges were split between him and Sydnee Carter and the decision went to public vote. Adrien received fewer votes and hence had to leave the show but not before making a splash as a multi talented young entertainer, who can act, write, dance and sing with equal ease.

Adrien is based in NSW and has musical roots. He started performing at a very young age and at the age of 15, in 2012, was chosen as the face of new generation of stars in the reboot of the Young Talent Time, another Australian talent show,. He began dancing at the young age of 5 and stated his musical journey at the age of six, when he joined the Sydney Conservatorium.

He first appeared on TV at the age of 11 as a participant on the Panjo All Stars show that was broadcasted on Channel 9 and Nickelodeon. He reached the top 10 competing against some of the best talented dancers and singers in Sydney. He has also been part of the BackYard Science Series that was broadcasted on Channel 9. In addition to these appearances, he has also been seen in various short films and TV commercials.

Adrien is an expert in playing guitar, piano and drums. He has been producing his own songs, with his older brother, since a young age. His family has a fully equipped recording studio in their home in Sydney.

He wrote the song, "You Are Too Beautiful", in the year 2009 and won the top spot in the ACMF National Songwriting Competition for his age group. He played the part of Olivar in the TV series, In Search of Paradise, for Grundy TV along with Rebecca Budig ("All my children" fame) and Christian de la Fuente ( "Driven" fame).

He made it to the super bootcamp round of 2014 edition of The X Factor show by singing Ocean's song "Thinkin Bout You". He cleared the first bootcamp challenge and sang a song by Ne-yo in front of live audience of 1000 and the judges, in the second bootcamp round. He then had a chance to perform the song, "More Than Words", for his mentor for the show, Natalie Bassingthwaighte and Jennifer Lopez, his guest mentor.

Bassingthwaighte was impressed with his talent and selected him for live shows.

Adrien is a livewire performer and sets the stage on fire with his singing and dancing. His aim is to bring something new to the music industry. He has learned a lot from his X Factor experience and looks forward to write a new chapter in his life by entertaining and charming live audience with dance and music.

Book this celebrity today to be the part of your next event! 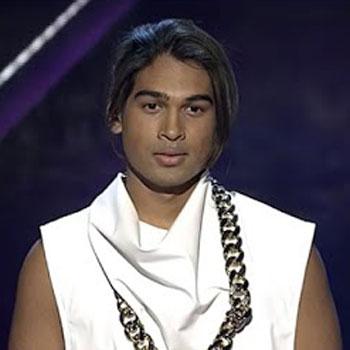