Andrew is without a doubt the man with the golden voice

A 40 years of age, Andrew Wishart realises that The X-Factor may be his final chance to make it in the music business.

Now a star of X Factor

Andrew Wishart; is a  41 year-old Singer from the suburban Melbourne Victoria, who against the odds, made it to the recently finished Grand Final of X-Factor Australia; to be placed eventual Runner up in the series.

Andrew sang Adele's "Someone Like You" at his 1st audition, and was inspired to try out for the show by his four children, who also suggested he should sing that song. This proved to be a challenge as Andrew basically learnt the song in his car during the night before this audition.

“I never started along this path for so called fame... I did it to show my children that anything can be done, and that “can’t” is not a word I want to hear from them very often”.

Before auditioning for The X Factor, he worked as Territory sales manager for vending machine company, Cupa Nutz. He also played in a few local bands and trios etc throughout Melbourne and Rural Victoria, and has been singing non professionally for around 25 years.

Originally from The East Gippsland area of Victoria, Andrew considers the towns of Bruthen and Bairnsdale as his ‘other’ homes, and holidays there regularly with Family.

“I sometimes stop and wonder why our children aren’t growing up in the country, and have the same fantastic sense of freedom and space that you just can’t get elsewhere...”.

In fact Andrew’s wife Robbie was also born and bred in Bruthen; and they have known each other since as long as they can remember.

The X-Factor proved to be something a whole lot more than what he and his Family could ever have imagined.....

“All along I told the producers I would be guided by them, as I knew nothing of the TV industry at all; but I remained steadfast in the belief that I just wanted to be ‘real’!”

With candid and personal mentoring from Natalie Bassingthwaite, with whom Andrew maintains a solid friendship, remaining humble and “real” was very natural. Andrew struck a chord with Australians, and was the only contestant to never be voted into the bottom two ‘sing for your life’ showdowns; and eventually lost the Grand Final by a meagre 1% of the national votes!

His renditions of songs like Burn for you, Still haven’t found what I am looking for & Dakota were met with spectacular comments from all of the Mentors.

“I don’t like the words famous or celebrity; but if that what it needs to labelled as, then I can deal with that... as long as I can sing to as many people and inspire as many people as I can as a result of the journey. I did this for a better life for my Family... there is no better reason.”

Andrews future visions are of touring all around Australia with a band, and recording an album featuring his many self written songs; to sing and entertain for a living. “Taking the Family on a tour of Australia whilst singing..... that’s living!”

Wishart cites U2, John Farnham, Dire Straits,  Queen, Deisel,  and Robbie Williams as some of his musical inspirations; and also hopes to one day venture into possibly musical theatre, radio and music production. 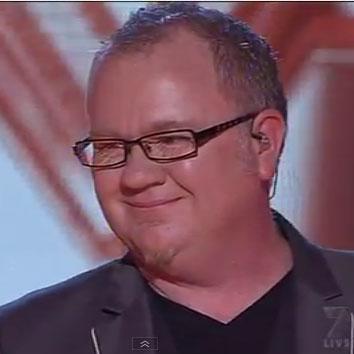