Cisca is a singer/songwriter/ performer based in Sydney. She has been actively performing locally and interstate. All who follow the singer round the gig circuit often describe her as ‘the little pocket rocket.’ This young artist puts heart and soul into all her music and every single performance. Cisca began her music studies at the tender age of four, where she began singing and dancing in her father’s band in her native Chile, before migrating to Australia at age 4.

By the time she was eight years old she was attending ‘The Johnny Young talent School’ where she specialized in modern dance, tap, and ballet and of course; singing. undertake singing lessons as well as develop her piano playing skills...Shortly after leaving the school Cisca continued to undertake singing and piano lessons developing her piano skills at She developed her piano skills at the Conservatorium of Music completing 7th grade piano with 6th Grade theory. Her love for the piano didn’t stop there, rather, it took on a different direction of experimentation with Latin, Jazz and pop sounds which then became an early influence in her music.

These influences saw Cisca enter the Sydney Latin scene and quickly began performing at corporate functions, major Performances music Festivals as well as nightclub venues fronting various bands; La Clave, Azucar, Mambo Asi, Carlitos Orchestra, Son Veneno and funk band Matanza. She has also had the privilege of sharing the stage with MC Maya Jupiter (Channel V and Triple J Host) on various occasions. She has also been the opening act for Cosima Devito during one of her tours at Will and Toby’s in Sydney. Cisca reached the final top 40 rounds of Australian idol for 2009 and has recently had air play on THE EDGE 96.1. Cisca is back in the studio working with Sydney Producers on her EP that she is performing with an all LIVE BAND. This EP will showcase her versatility as an artist by blending commercial RnB, Pop, soul, Funk and Jazz influences that will surely present this artist in an exciting light to the music industry. 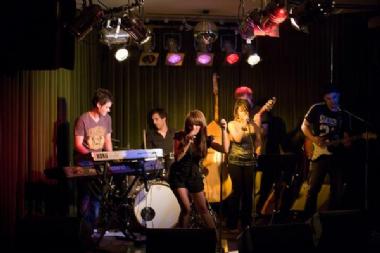