Dean Ray is now one of the biggest celebrities in Australia since finishing as runner-up in the 2014 edition of the X factor. The 22-year-old hails from Melbourne, Victoria. He has been recently signed up by Sony Music Australia and is expected to release a new album soon. He also released his new single, Coming Back, recently. His self titled album that is going to be released in November 2014, will feature songs performed by Ray on the X Factor show and will also include the Crying (Roy Orbison Classic), Yellow (Coldplay) and Into My Arms (Nick Carve) among others.

Ray was born Dean Pritchard and is originally from NSW, Australia. He moved to Queensland at the age of six with his family. Music is in his genes as both of his parents Chris and Angie toured the country with their own country band named, Itchy feet. He had a very interesting childhood as he often used to sleep backstage on the guitar cases at venues where his parents were performing on stage.

He started learning music at a young age and was playing drums at 9 years of age. He learned playing guitar at the end age of 13 and also started writing his own songs. He then became part of his parent’s band along with his brother.

He dropped out of school to pursue his passion of music and since then has been travelling all around Australia. He has also spent some time in rehab. Before rehab, he used to drink heavily for three years continuously.

He later got a job in a music store but had to quit the job when he broke his back in a freak incident. The loss of his job forced him to make a living from playing music and eventually he became part of the X factor.

He reached super bootcamp round by singing the Bette Davis Eyes (Kim Carnes). He moved to the next round by impressing the judges with his performance of Yellow (Coldplay). This song was performed in front of of 1000 music fans and the judges.

Ray was the last remaining competitor in his mentor's category when Adrien Nookadu and Tee were eliminated by the seventh week of the competition. He reached the bottom two of the competition in the week nine but the judges were so impressed with his talent and performance that they chose him to move forward into the competition.

This Superstar and charismatic talent is now available for bookings. The Top Australian star, who has been described as mysterious and intense by the media, describes himself as a simple guy who wants to tell a story with his guitar. He is now taking bookings all over the country. So, if you want this celebrity to be the part of your event, book him now.

“Ive been called mysterious, intense, confusing, crazy and captivating. But at the end of the day, I’m just a guy with a guitar and a story to tell. Live and love...”

Australian audiences became aware of Melbourne-based singer Dean Ray on April 4th during the auditions of X-FactorAustralia. Dean had the crowd wildly cheering to his own rendition of ‘Bette Davis Eyes’ with Redfoo telling Dean to ‘check your passport, because you’re out of this world man.’

Dean grew up in tiny Meandarra, QLD with his father Chris, a contract stockman, and mother Angie, a stay-at-home mum. Dean says he was born into music. While heavily pregnant with Dean, Angie was playing bass in rock bands. In fact his parents were musicians on the country-music circuit, which lead to Dean traveling Australia with his parents. and sleeping in guitar cases while they packed up their gear to travel to the next beer soaked venue.

‘Traveling with musicians you pick up a think or two’ says Dean. At age 6 he was keen to learn the drums, After only 5 lessons, he had it. Then at 13. Dean learnt to play the guitar, and that’s also when he began to write songs. Dean and his brother, who played piano, were recruited into their parents’ band ‘Itchy Feet’. Dean remembers, ‘That was the start, I just got better and better.’

At only 16 years of age, Dean left his family home to follow his musical dream. ‘I left home young because I just felt that chapter was over and I wanted to see others things. I wanted to go broke, I wanted to sleep under bridges...’ During this time Dean traveled and worked on farms to get by which lead to a back injury working in a warehouse. This forced him in to playing music full time to pay the rent.

2014 is the year for Dean he says ‘Everything has just fallen into place.’

On October 20th Dean Ray was announced the runner up of the X-Factor 2014 series. With 13 songs in the top 200 on the ARIA Chart as well as already reaching #1, it’s only the beginning.... 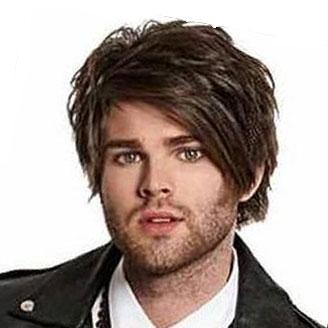