"She's a force of nature. Amazing singer and songwriter, original vocalist, wonderful trumpet player and multi-instrumentalist. She writes songs that come directly from the heart."

An endorsement like that from the man who signed Nora Jones, Willie Nelson and Wynton Marsalis is something to make one sit up and take notice. The late great Lundvall even featured Elizabeth's music on his Sirius Radio XM Bluenote Hour. Unusual for an unsigned artist!

But it's a long journey from her days as a freelance trumpet player to her fourth and long awaited new album THE BRIDGE. Elizabeth remembers a life changing moment, walking home from a jazz big band rehearsal one sunny morning years ago. “I suddenly realized I couldn't do it anymore, as grateful as I was, I had to find my own voice.” Find her voice she did: three albums later having swapped trumpet for flugelhorn, piano and songwriting, Elizabeth had a small but growing audience and some fans in high places.

David Hoffman, long tern arranger and trumpet player for Ray Charles says, “ Elizabeth Geyer's music is heartfelt, soulful and beautiful. She's equally proficient on piano and flugelhorn, both of which she utilizes to enhance her deep clear voice. As a singer/songwriter she's equal to the best. Her music is as honest as it gets.”

"..now that she's here, it's clear she's here to stay. Killer stuff for boomers that have given up on finding anything new ever again worth their effort."

"With The Bridge Elizabeth Geyer has triumphed in every way possible. As far as this listener is concerned it is a perfect 5/5 stars!"

'Blessed with a lovely clear voice, Geyer delivers her intensely beautiful songs on The Bridge like the very best female colleagues from the past.. simply beautiful singing. Songs and lyrics are ongoing very impressive..  The Bridge is such a gorgeous, emotional thorough album that will last a lifetime.'  -  Pieter Wijnstekers HEAVEN MUSIC MAGAZINE NETHERLANDS

chocolate cake causing endorphins of peace and love. She is Nora Jones & Chris Botti all at

once with dynamic vocals like the dawn and midday!' 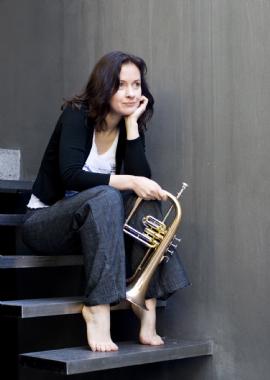