Marlisa Punzalan is the youngest contestant ever to win the X factor show in Australia. This 15-year-old bested the two other contestants in the finals, Dean Ray and Brothers3. Marlisa is a child prodigy and she was born in Sydney in the year 1999 to her Filipino parents. This high school student is certainly not new to such attention and fame. She had been singing since the age of two. As the winner of the show, she signed a contract with Sony Music Australia and has also released her debut single on itunes, Stand by You.

Marlisa hails from Glendenning in New South Wales. She started singing at the young age of two. This soft spoken singer has been taking part in singing competitions since a very young age.

In the year 2009, she won the Sydney performing arts challenge and when she enthralled the audience by singing the I Have Nothing (Whitney Houston). She also won three gold medals in the year 2013 again, in this challenge

She performed in her first solo concert as just a 12 years old at one of the popular live music venues in Sydney in the year 2011. In addition to the above, she has also performed during the concerts of various other singers.

In addition to being a melodious singer, she also plays piano and is really good at it. She has been playing piano says the young age of four years. In fact, she performed in the international Conservatorium of music from 2003 to 2005. Her first solo piano concert was at the age of seven.

She decided to participate in the Channel 7 show as she felt that she was still very shy and did not speak much. She received a standing ovation from the judges at her audition when she belted the hit song, Yesterday, by The Beatles.

Competition was no match for her as she trounced the competition in the super bootcamp round and easily made it the second round. For this challenge, she chose to perform the song, Never Be the Same (Maulboy). The 1000 music fans and the judges at the show were equally delighted with her performance.

In the next round, she chose to perform the song, I'll stand by you. Needless to say, the judges were impressed and Keating invited her to perform live.

At the end of the show, she was the last remaining contestant in the Keating team but everybody knew that she was the one to beat.

This naturally talented singer became part of the bottom two, against all expectations, in the tenth week of the show. The judges were split but the public knew and voted her back into the contention.

It is difficult to keep such highly talented singer out of the spotlight for long and she showed her mettle when she was announced the winner of the 2014 edition of the show.

One blink and you may miss Marlisa as any other regular teenager of her age but when she starts singing, she owns the stage. This singing prodigy is just 15 years of age and still in high school but she is ready to rock the world. Her first album is coming out shortly. She is also taking bookings all across the country. So, if you want to make your event exciting, book this rising Australian star now. 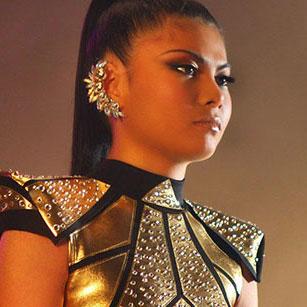