TMac - The Man The Songs The Show Elvis!

Whether it be a private party, Corporate event, Wedding, other special event or a shopping centre feature or festival … Pseudo Creations will ensure your complete satisfaction. The Elvis Tribute Show - The Man, The Songs - THE SHOW! Either with “The Illusions” dancers and costumes or alone, see the man, Terry Mac, sing the songs that bring the show to prove that the King Is Still Alive! …well at least through the likes of Elvis Tribute Artists like our own Terry Mac.

Terry Mac performed as a singer with local bands (Adrenalyn & Progress) in the inner Melbourne suburbs of Fairfield, Northcote and Thornbury in the seventies and eighties and even featured on the radio channel “3UZ” John McMahon's Radio Auditions performing as the lead singer of the band “Progress” during the seventies and eighties. The song that achieved the band the highest award of the famous “3 gongs” show was no less than a rendition of Elvis Presley’s version of “Blue Suede Shoes”.

His love of rock and roll finally stopped with just one artist, Elvis, and that yearning has brought him to now as an Elvis Tribute Artist. Terry Mac makes it clear that he is not an “Elvis impersonator” but a Tribute Artist with an intimate longing to keep the “King’s” wonderful songs alive.

With up to more than twenty songs you'll hear the ones that made the Man famous, Teddy Bear, Suspicious Minds, American Trilogy and of course the closing song of most of "his" concerts .... 'Can't Help Falling In Love'.

All shows can be arranged to suit your needs.

List is not conclusive and further songs can be performed. 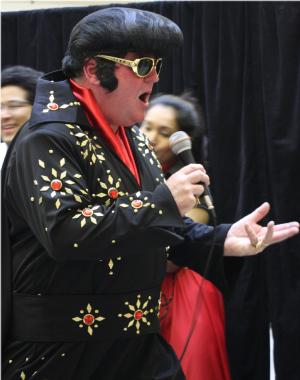