Request a Quote
Welcome to the world of slapstick up high.  Enjoy the antics of these two Chaplinesque Charlies. Your guests will be amused by their height, their hilarious big boots, their bickering and bubbling banter and their overall awsome visual effect.  Their presence will make the day for your visitors.

The Chaplins appeared at the Glastonbury  Arts Festival in the UK in 2005 where they were honoured to be hailed by Arabella Churchill as one of her favourite acts ever!

Meanwhile, they have been waddling and arguing their way through the Rocks in Sydney, Darling Harbour Harbourside Sydney, and numerous corporate celebrations including the Clown Doctors Annual Fundraising Gala Ball at Luna Park.

Michelle Seaton and Soledad Cordeaux have been performing all their lives (ask their mothers).  They met at the Australian Theatre for Young People in 1985.

Soledad Cordeux trained extensively at the Actor`s Centre  Sydney and later joined Lecoq - trained Richard Hayes Marshall`s famously intense physical theatre company which had sellout successes.  She has worked as a clown, mime, story teller, stiltwalker and street theatre comedienne for the past decade.  She has performed in Asia as well as in Australia and worked with many local companies including ERTH, Circus Solarus, and Icarus.

Michelle Seaton trained at the Actor`s Centre at it`s inception and went on to train at the Desmond Jones School of Mime and Physical Theatre and clown with Ecole Phillipe Gaulier in London.  On her return to Australia she trained with Lecoq trained John Bolton.  She has worked with most major Sydney street theatre companies including ERTH, Icarus, the Fire Flies and Circus Solarus before returning to Europe to train with master clown teacher Pierre Byland in France.  Following this she performed on stage with German character mask company Familie Flöz in Berlin, Florence, Genoa and Naples, Italy.  Michelle has also performed on stilts in Singapore, UK, Belgium, Italy and Switzerland. 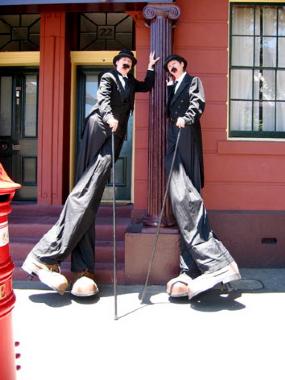