In those formative years John toured throughout Scotland as featured accordionist working many Summer Seasons on the Theatre circuit, and also appeared regulary on Grampian Television in Aberdeen. In 1963 John settled in New Zealand, and quickly established himself as one the country's leading cabaret,radio, and television performers.In 1970 he recorded his first album "The Dark Island" which was to be the first of many albums to be released . John has returned to New Zealand several times for appearances including a three month national tour.

John came to Australia in the early seventies, where he was an instant success, his popularity grew rapidly, and he was booked to appear in every major club, cabaret,concert venue, and television variety show "Down Under". John's own special brand of accordion music, and dynamic interpretation, delivered with a great sense of fun and enthusiasm, has endeared him to audiences all over the World including Hong Kong, the Philippines, Arab Emirates, and the South Pacific. He has also appeared in some of the top Casinos including Star City & Launceston Country Casino (Australia) and Sky City (New Zealand) He has toured with, and supported many overseas acts including Dame Kiri Te Kanawa, Des O'Connor,Kenneth McKellar,Andy Stewart, Johnnie Ray, Al Martino,Frank Ifield,The Drifters,The Krankies, Sir Harry Secombe, and has appeared on all major Cruise Lines throughout the world including the "Love Boats' .

John is well established as a recording artist, and many of his albums have gone "Gold" and most of them have been released Worldwide. His 50th Album "Years Apart" has just been released and includes some of his most requested "On Stage" favourites...ranging from Scottish, Irish, Semi Classical, to his favourite French musettes, and has been acclaimed for showing his diverse accordion talents....and special versions of tunes like "Highland Cathedral" and "Lift the Wings' from River Dance. John is an immaculate performer and in recoginition of his vast talent he was honoured twice in 1999. Firstly by the New Zealand Accordion Association at the South Pacific Accordion Championships..where they awarded him with Life Membership of the NZAA, and then again in Australia from the AATA, when they inducted him into there "Roll Of Honour" for his enormous and continued contribution towards the popularity of the accordion.

One critic recently wrote regarding John's performance:
"Ace accordionist John Macdonald demonstrated his ability brilliantly. His skilful playing and infectious good humour were a winning combination.His expertise on the Piano Accordion is simply magical, coupled to his rapport with the patrons"
Another critic wrote:
"Accordion player and Musical genius John Macdonald - displayed both technical and musical mastery of his chosen instrument. His ebullient personality endeared him to the audience "

John continues to work regularly overseas Touring and appearing on some of the World's Cruise Ships, as well as presenting his own show "Scotland the Brave" with a cast of 22, around Sydney's Club and Theatre circuit. As for the future, great interest has already been shown for John to present his show in the USA, and an invitation to perform in the Peoples Republic of China..at the Concert Hall in Shanghai - And in 2003 John's accordion Music was chosen for the Opening scenes of a Major Movie made for International release by South Korean Film Director KT Kwak. 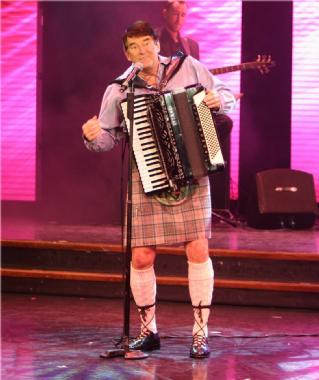