A highly experienced and versatile performer, with shows that can be soft and sensual right through to outrageous and hilarious – it’s no wonder Danica Lee has emerged as a favourite in the Australian burlesque scene. Incorporating elements of traditional burlesque striptease and humour with pantomime and sass, she can have you rolling in the isles or loosening that collar, wondering if it's hot in here or if it's just you. With her classical figure, she has been described as having ‘curves that will knock your socks off and looks to keep you down for the count’. She may be petite, but Danica Lee demands no less than her audiences full attention when performing.

All of her costumes are custom made by hand, using materials sourced from all over the world including stunning vintage Swarovski crystals and rhinestones, with bespoke jewelery and shoes created just for her shows.

Her audiences have come to expect nothing but pure glamour and true showgirl style when she steps on stage, and she aims to please! With numerous performances at some of Australia's most popular burlesque and variety nights (The Ruby Revue Sydney and Melbourne, Dr Sketchy's, A Velvet Affair, Wicked Women Comedy, A Wink and a Smile Burlesque, Burlesque Bar) as well performing along side bands performing live or in music videos, and many a private function - Danica Lee looks to expand her empire and take her unique version of burlesque to the world, having performed in Europe, New Zealand, United States and Canada. Danica Lee is the current Miss Burlesque NSW 2011, and took the titled of 'Entertainer of the Year' at the Miss Burlesque Australia Grand Final in 2011. She also holds the title of Miss Classic Burlesque 2011 & 2010.

Classic Striptease – No one does a classic burlesque striptease like Danica Lee! A tribute to the burlesque stars of old, performed in a dazzling over the top red evening gown – allow your guests to be teased and titillated, but never offended.

Fan Dance – A burlesque classic, performed with an impressive 80” pair of feather fans. An elegant routine that can be performed with the following costume options: g-string and pasties, nude body suit embellished with Swarovski crystals, merkin and pasties.

Striptease and Fan Dance - An extension on the classic fan dance, this routine begins with a fun and energetic striptease routine, where the giant feather bustle of the costume is revealed to be a pair of giant feather fans. Just when they think its all over, your guests are treated to a cheeky fan dance routine as well.

Bathtub striptease and bathe – Performed in a full size replica clawfoot bathtub. The act begins with a traditional striptease routine followed by a dip in the bathtub with water, champagne or milk finale.

Balloon Pop - Another burlesque classic, my balloon pop routines come with many theme and extra's options. Some themes include cupcakes, heart breaker, bathtime, and the black cat. The possibilities are endless, with the choice of including such extras as treats inside the balloons, glitter, and audience participation.

'Peepshow' - A direct striptease inspired by the film noire starlets of old. A poignant commentary on the burlesque dancer and how she is often pressured to reveal more sooner, to keep her audiences interest. A strong and bold act not for the faint of heart - this one will make you gasp. Includes a champagne finale.

'Moonstruck' - An elegant and sophisticated tribute to Sally Rand. Set in two parts, the first half is a soft and ballet inspired scarf dance where each part of the costume is revealed to be no more than a sheer scarf, ending with a softly backlit silhouette dance. Next a giant balloon (approx 4FT) is used to hide and reveal the body before being burst in a jazzy finale. A truly demure act that has withstood the test of time to show the delicate and soft nature of burlesque.

'Bathtime' - A cute and lighthearted routine that follows our tired (and popular!) young lady as she returns from a hard night out on the town. All she wants is to sink into a nice warm bath and sing away to her favourite tunes - but the darn phone won't stop ringing! Cute and quirky with a few laughs put in for good measure - a bit of fun with a little titillation without being too naughty. Water, champagne or milk finale. 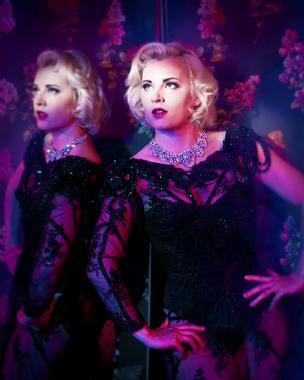