At 9:25pm on April 18th 2005 23 year old Matt McFadyen along with fellow Australian’s Rob Porcaro and Eric Phillips completed their 8 Day trek to reach the NORTH POLE, a feet previously achieved by only 5 Australians. Matt becoming the youngest Australian to ever complete the journey.

This amazing journey took Matt from Sydney to Norway, and then across the frozen Arctic ocean by military plane to the floating Russian Ice Station Borneo. After a day of final preparations Matt and his team mates began their long haul across the Arctic ice, dragging 70kg sleds. Battling extreme weather conditions including blizzards, white outs, open water and temperatures 40 below Matt and the team pushed North towards the pole, which they successfully reached after covering over 20km in 14 hours of trekking, their longest day of the expedition.

After Matt’s successful expedition to Antarctica in the summer of 2003/04, he can now proudly boast going to both Antarctica and the Arctic, an amazing feat for anyone let alone someone at the tender age of 24. More expeditions lay ahead.

Now back in Sydney Matt has continued with his key note presentations, based around his experiences in Antarctica and now the Arctic, his presentations cover a variety of topics including; The Journey of life Turning Dreams into Reality Overcoming Adversity to Succeed Proper Planning for life’s Adventures Self Belief Team Work & Leadership.

Matt McFadyen grew up in suburban Sydney fascinated by the mysteries of life beyond the confines of his home and familiar surroundings. In December 2003, Matt McFadyen ‘the adventurer’ was born when, at the tender age of 22 years, he set sail for Antarctica in the company of five like-minded adventurers.

Taking a 43-foot yacht across the most dangerous ocean on earth was no easy task. Having to navigate fields of icebergs while beset by storms of mammoth intensity, Matt was forced to draw on every ounce of courage and perseverance he could muster as nature surely tested his resolve and that of his fellow adventurers. The meticulous planning and preparatory work that had taken two years to complete paid off in January 2004 when Matt and his crew reached Commonwealth Bay Antarctica. For four days the hardy adventurers explored the pristine wilderness that is Antarctica. A life changing experience for any person let alone one so young as Matt McFadyen.

On the return voyage Matt and the crew again experienced the raw force and power of nature. With Matt at the helm the small craft was pounded by a massive storm 550 nautical miles south of Tasmania. Waves of up to fifty feet high swept across the yacht knocking it over several times. Matt himself had to struggle for his life as the waves continued to knock the boat over and almost  washed Matt himself overboard.

This harrowing experience and the raw power of nature inspired and motivated Matt to further adventures. As a young adventurer, speaker and leader Matt is second to none. His achievements at such a young age are testimony to his hard work and motivation. His passion for life, his overall presence and above all, his unique story makes him a must see individual and speaker.

"...Dear Matt, Thank you for your presentation to the VISA staff. Your presentation encapsulated the room, inviting the audience to share in your journey, moving from highs to lows and giving the audience an insight into both the physical and mental strength that it takes to turn a dream into reality. You challenged the audience to strive to accomplish their own goals whilst underpinning the importance of team work. Your presentation was extreamly well recieved, and relevent both in the work place and at home. Your life experiences are a testament to your determination and commitment to your life journey 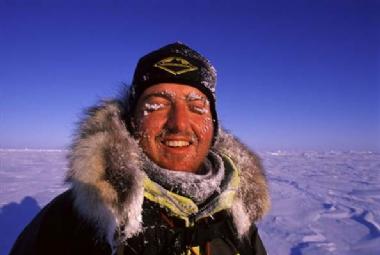