Bombay to Beijing by Bicycle

‘Congratulation,’ grinned Dr Chawla. ‘You are having the malaria.’

And so begins Russell McGilton’s as he attempts to cycle from Bombay to Beijing by bicycle in the hope of writing a book about his cycling odyssey. Inspired by a life changing event and the taste for good ol’ adventure, Russell would not only battle the reoccurring malarial fevers but would unwittingly cycle near a nuclear test site, be chased by packs of wild dogs in the dead of night, run up trees to escape charging rhinos, get caught a little too near to Afghanistan during September 11 and lastly, have a stack with a yak.

Overcoming these adversities, Russell managed to complete the trip in 10 months and to successfully have his dream of having the book published (Yakety Yak: Bombay to Beijing by Bicycle Penguin Group) while a one man show of the trip Bombay to Beijing by Bicycle won the George Fairfax Playwright Competition 2003. Russell was also featured in the Melbourne Writers’ Festival 2004 and has appeared on Red Symons’s 774 radio program, 2UE Sydney and with Russell Gilbert on Radio SEN 1116 and has recently returned from the Edinburgh Festival 2008 performing a one man show of the trip.

Apart from this great adventure, Russell has travelled and worked in over 30 countries from sitting with mountain gorillas in the African Congo, motorcycling through typhoons in Taiwan, picking grapefruit a kibbutz and climbing Mount Kenya. Other professions include, performer and writer for children’s theatre, television producer, writer and director for commercials for TV Media Consultancy and as a director of his own advertising company, Big Mouth Promotions. A natural speaker, Russell has tread the boards as an actor and comedian here in Australia and overseas, making appearances on Neighbours, the London comedy circuit and in a cover band as an Austin Powers/Dr Evil impersonator.

Breathtaking, exhausting and often hilarious, Russell entertaining stories and photos of his adventures will inspire anyone with an ounce of wonder dust in their pants and the courage to say ‘yes’ to the big ‘what if’ that lies out there for all of us.

‘I could not have asked for anyone better to host the event.  Russell was sensational and I would have no problems giving the highest recommendation to anyone else hiring him.’
-    Liz Zelencich, Newspapers in Education, The Courier

‘Russell spoke from the heart and his sincere, honest approach is to be commended. It is very difficult to speak openly about aspects of your life to others but he managed to do it in such a way that I could relate to him. Very entertaining and inspiring, what a journey and the photos were great. Thanks for the great opportunity to hear someone of such quality!! Excellent!!!’
- Staff from Caroline Chisholm Catholic College

‘So lively and a real story-teller, he took us through his cycling adventures from Bombay/Mumbai to Beijing in such detail, that one could almost feel his pain at times.  Needless to say, Russell’s adventures left a large majority of the audience shaking their head in amazement!’
-    Sally Meares, Queensland Transport

“Russell McGilton was a guest speaker in my Writer and Publication course (Master of Creative Media) this year. Russ is a brilliant speaker. He combines wit with insight and erudition. He relates well with students. He is a natural teacher…”
- Antoni Jach author and creative fiction lecturer at RMIT

Russell’s session was excellent.  His talk was clear, funny, well presented and enjoyable.  Many people indicated to me how they had enjoyed his talk and how he present it to the group.
-    Pippa Andrews, ISACA

Book Russell before December 21, 2012 and receive a free eBook of ‘Bombay to Beijing by Bicycle’! 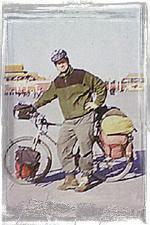