Em O’Loughlin is a multi-award winning comic, MC, actor/voiceover artists and writer who sings too!  She could be just what the doctor ordered for your next event.

She has performed comedy throughout the US, in the UK and everywhere from Central Australia to Kangaroo Island.

As a motivational tour de force Emily has channelled a gob-smacking weight loss of 85kgs into her comedy and bought laughter and warmth to people across the world. She has stared the grim reaper in the face and come out laughing! She is inspirational to the inspirational. As an audience member once said, “You ROCK!”.

As an inspirational speaker let her take you on the rollercoaster that was her life. You will see how she took the bull by the horns and came out victorious. From being addicted to chocolate to her mad Irish Grandma, hers is a story that will resonate with every soul. How she ran from her problems, how she eventually faced them. We have all been there. Emily knows this and she wants to share the “love” that is being human. She just tells it with such candor and humour that there wont be a dry eye in the house! But fear not....you won’t be able to stop that big grin from spreading either.

From Hollywood to New York and back to Melbourne she has entranced and enthralled with her tale of overcoming huge odds:

“O’Loughlin is a talented comedian…is able to weave a delightful tale…. She has a gift for mimicry and flawless comic timing.” BACKSTAGE, NEW YORK

“In sixty captivating minutes Australian actress and comedienne Emily O’Loughlin takes us on a journey. Towards the end of the piece Emily must face …a very frightening episode….it’s almost impossible not to be dazzled by her spunk.” NYTHEATRE, NEW YORK

"brilliant storytelling keeping the audience enthralled. Her warm stage presence made you feel as if you were listening to an old friend...hilarious and touching…a must see." THE GROGGY SQUIRREL

“…honest and insightful show; energetic, animated and whacky.”RIP IT UP

No wonder people are raving about her….after all Emily has an excellent pedigree.

In 2001 she was the first woman to win the National Raw Comedy Competition. In 2002 she came 2nd nationally in the Greenfaces comedy competition. Then, she went on to work as a support act for Puppetry of the Penis 2001 & 2003. Soon she was filling in for the breakfast crew on Adelaide’s MMM Radio. Then she took on the blousy role of Caprice Cerise in the Aussie feature movie The Honourable Wally Norman directed by Ted Emery of Kath and Kim fame. She showed up next in Macleod’s Daughters where she played Constance, a lovely rural woman with a penchant for a tipple and a bawdy eye. Emily launch her first solo show “LifeSpam” as part of the 2007 Melbourne Fringe and in 2010 she trotted out her sell out show “HOW I MADE MY ARSE LOOK SMALLER SIMPLY BY PULLING MY HEAD OUT OF IT”.

This intensely personal story of losing herself to find herself is warm and funny and hugely inspirational. It is both funny and sad but like all stories of growth it is uplifting and had the audience crying and cheering.

Em is currently finding herself in high demand with her latest offering “Em O’Loughlin is The Happiest Loser” a by-product of her Fringe shows whereby she speaks to people suffering with weight related issues including what it is like to have addictive behaviours that stem from her experience of being overweight. In addition to her fabulous motivational speaking Emily is a sought after MC and Host who is always fun, witty and warm. She will make your next event fun and effortlessly smooth making guests and speakers feel relaxed and ‘at home’. 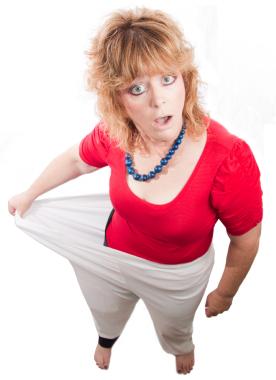