Aaron Sansoni, The New Breed Of Selling Superstar. International Speaker, Author And Recent Nominee For Entrepreneur Of The Year, Aaron’s Effected The Lives Of Over 2 Million People, In 14 Countries In Over 100 Industries. Featured In Over 20 Publications Around The World, Aaron Runs A Successful Venture Capital Company With Interests In Media, Tech And Real Estate Projects Around The Globe.

Aaron Is An Internationally Acclaimed Sales Expert Who Has Spoken At Some Of The Most Exclusive Venues Around The Word And Shared The Stage With Business Icon’s Including Billionaire Sir Richard Branson, Hollywood A-Listers Such As Arnold Schwarzenegger And Eric Thomas, The Most Viewed Motivational Speaker On The Planet.

But where did it all start?

Growing up in a disadvantaged environment and a broken home in the outer suburbs in Melbourne Australia, Aaron grew up one of seven children cramped under the same roof. He spent most of his time playing basketball and thinking of inventions and business ideas that would change his life. He was diagnosed with Attention Deficit Disorder in early school years and he was constantly told by his teachers that he wouldn't amount to anything.

By age 9 Aaron was doing a regular paper round. By 12 he had started his first business, a local car washing for the neighbours. At age 16 Aaron realised his passion for sales and went on to work in everything from door to door, over the phone and face to face sales achieving phenomenal results along the way. By the age of 23 he had amassed over a decade of sales experience, knowledge, training and world travel and opened his first consulting firm with the goal of helping business owners and entrepreneurs across the world realise their full potential, A goal he still has to this day.

Aaron heavily supports the Kathleen Keegal Children's Fund, two orphanages in Sri Lanka that care full time for children who were orphaned after the 2004 tsunami. Aaron and the orphanage help in providing a safe and loving environment.

Aaron Is A Mentor To Top CEO’s, Athletes And Celebrities And Has Personally Helped His Clients To Make Billions Of Dollars In Sales From His Four Award Winning Global Education Brands. 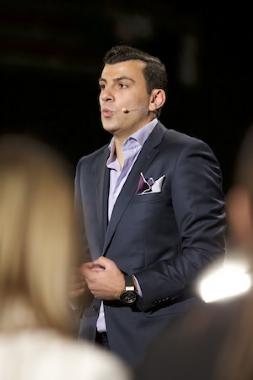