A descendant of Gamillaroi Bigambul tribe, Dhinawan is one of Indigenous Australia’s most engaging, articulate and entertaining public speakers. Known for his spontaneous, straight-from-the-heart cultural commentary, Dhinawan’s keynote speaking style has attracted high profile organisations such as Telstra, Foxtel, Oxfam, Australia Council of Educational Leaders, The King’s School, Fosters Group Limited, Quicksilver, and Tourism Australia. Starting as a tour guide on Queensland’s Fraser Island when he was 19 years old, Dhinawan has since become one of Australia’s busiest cultural ambassadors.

When not spearheading anti-bullying programs in primary schools and painting boards for pro surfer Kelly Slater, the now 36-year-old travels regularly overseas to perform in the UK, France, Germany, Austria, Switzerland, Scotland, and Italy. Founder and front man of Dhinawan Dreaming, the Byron Bay based entertainer uses the mediums of dance, song and storytelling to promote cultural awareness and understanding in a humorous, insightful and thought-provoking way. From festivals and forums to conferences and seminars, Dhinawan’s charismatic presentations have made him a recognised name on the national and international stage. His professional portfolio of compelling presentations is tailored to suit the client and the brief. Equipped with wisdom beyond his years and a natural gift of the gab, 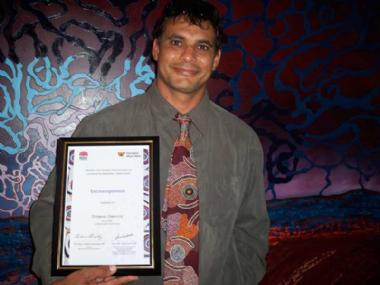