Request a Quote
Anders Sorman-Nilsson was born in Stockholm, Sweden and is a true Generation Y spokesman. A reformed Australian-trained lawyer, he is now the principal facilitator and coach at Thinque. Having been brought up as an independent thinker in a multicultural setting, Anders’ passion lays with Funky Thinking™ as a platform and as a tool to facilitate change and progress in teams and individuals. In his presentations, Anders communicates a synthesized smorgasbord of perspectives, angles and opportunities to challenge existing
boundaries and develop talent, progressiveness and innovation.

Anders completed his major studies at the Australian National University on an international scholarship, and holds an Honours Degree in Law, a Graduate Diploma in Legal Practice, and a Bachelor’s Degree in Arts (International Relations) from the A.N.U., as well as a Specialisation in the Law Governing International Relations from the University of Vienna, Austria. During his University studies, Anders spoke at a number of International Youth Leadership Conferences around the world, and was awarded ‘Best Speaker’ at the Vienna
Model United Nations Conference by former Secretary-General of the UN, Kurt Waldheim.

In his role at Thinque, Anders has co-designed the cutting-edge programs Generation Y + Generation X + Baby Boomers = Generation Talent³ ™ and Whole Mind Communications: Integrating IQ and EQ™. He helps organizations overcome the talent crisis by engaging the 3 Es – enthusiasm, expertise and experience – of the three generations in today’s workplace, thereby harnessing each generation’s unique talents so that organizations can fire on all generational cylinders. Anders’ fundamental belief is that organizations need to move from generational collision to generational collaboration in order to become true talent incubators,
and he uses his Funky Thinking™ methodology to help them on this path.

Anders has been interviewed by ABC and SBS Radio, and has featured in Australian, Swedish and Austrian magazines. He has authored numerous articles and is featuring in the 2007 book ‘Secrets of Great Success Coaches Exposed’ by Dale Beaumont. He is a Board Member of the Swedish-Australian Chamber of Commerce, Young Professionals Division.

Anders lives in Balmoral, Sydney where he enjoys a great life. When he’s not working, Anders is a keen skier and jogger, and takes every opportunity to travel to new places around the world. Having learnt to appreciate cricket in the last few years, he enjoys a quiet afternoon with a book on the couch in front of a test match. 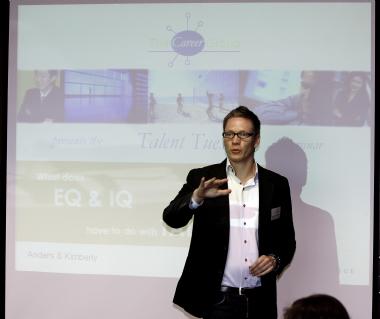