Brent Williams is one of Australia’s top professional speakers having spoken to collective audiences of over 100,000 people. He is a leading authority on peak performance strategies that will give you the edge in life. He has been regularly featured in the media on programs such as: the Today Show, Sunrise, Cheez TV, Mornings with Kerri-Anne, Channel 10 News, on radio such as: 2UE, NOVA 969, in the press such as: The Sun Herald, The Daily Telegraph, My Business Magazine, Dolly, New Idea, Woman’s Day, and countless other radio shows and dozens of newspapers.

At just 19, he wrote his first book titled, “The World At Your Feet”, which has been on the best sellers list both here and overseas. He later co-founded an organization called Tomorrow’s Youth International, which has run personal development and life skills seminars for teenagers in Australia, New Zealand, Singapore, Malaysia, Hong Kong and Indonesia. In 2003 he founded Kapow Media. A hugely successful publicity company. In 2005 Brent was awarded the Gen Y leader of the year which was a prestigious honor in is own right. Now Brent spends his time sharing his key messages with primary school student right up to CEO’s. His passion and humor have made him one of the most in demand speakers in Australia today.

What audiences have to say about Brent's presentations:

“I am always skeptical when ‘motivational speaker’ come to school. However Brent's presentation to the year group was nothing short of amazing. His energy is infectious and his impact on the students was something i have never seen before. The best part of Brent's presentation was that he is extremely relatable and seems to know how to communicate with students to get his messages across.”  Dean Burello, School Captain, Rosebank College, Fivedock

“I have seen Brent work his magic with audiences. He has a vibrancy and enthusiasm that is contagious and people just want to hear what he has to say and put into action the things he suggests. I have been inspired beyond belief at the changes I have seen. He helps people be who they want to be... and more!”   Kate VanderVoort, Former CEO Discovery Australia

“The more I hear Brent, the more that I realize he is one of the most gifted and talented presenters I have had the pleasure of seeing speak.  His coaching comes from years of experience and success, and his care and dedication to his clients and audiences is evident to everyone. I’ve never heard a better story teller who can both inspire and challenge. I can confidently say my life is bigger for having been mentored by Brent.”     Andy Hopper, Business Coach 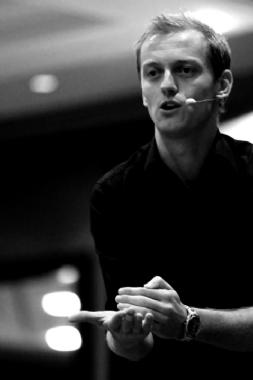