Australian Justin Morris is a celebrated international cyclist and ambassador. Morris, discovered his love of biking at an early age. In elementary school, the Sydney native noticed his best days were always the days he rode his bike to school. When the Sydney Olympics came to town, the mountain biking event inspired him to start competing.

After winning his first race, he never looked back. Morris was diagnosed with type 1 diabetes at the age of 10. He raced mountain bikes as a junior and at age 19, added road racing to his regimen for cross-training purposes. On the road, he excelled. In 2009, he signed his first road contract with the Australian domestic team MACE/Wilson Racing and joined the Team Novo Nordisk development team the following year. Morris has never let his diabetes prevent him from pursuing his dreams. In 2011, he finished fifth overall at the legendary Crocodile Trophy, a grueling 10-day Australian mountain bike event covering almost 750 miles.

Justin was the first person with diabetes to attempt the race and wasn’t even sure if he could even finish it. He has now completed it twice. Even as he travels the world, Morris finds time to continue his post-secondary education.

The 27-year-old studies psychology and education and is near completion of his university degree. Before joining Team Novo Nordisk, Morris wanted to be a school counselor, and is now considering a career in sports psychology. Morris splits his time between Australia and Traverse City, Michigan. 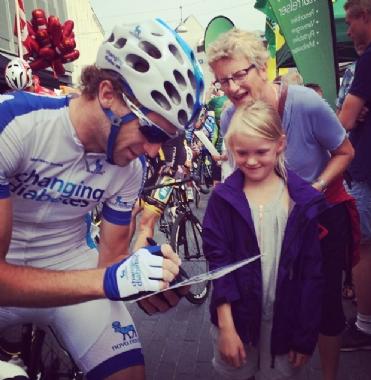