'What Not To Do On A Ladder'

Judith Lanigan travels with the following

And for What Not Do On A Ladder- as above PLus

Does your event need an unforgettable and informative talk about healthy and safe workplace culture, which also uses Circus skills and comedy to make an impact and engage the audience to really listen?

Judith Lanigan is a Licensed Investigator, Author and  Circus stunt artist, and uses her own experiences to educate about the correct processes for dealing with issues of safety, bullying and harassment in the workplace.

Mishandling of these issues in the workplace can cause the victim or complainant to escalate, which means the company or organisation can end up with a much larger problem, or worse, a problem that is not resolved and does not go away.

This talk also addresses 'welcoming complaint' as it enables improvement,  'Black Swan Event' business theory, the need for 'self-honesty', achieving the impossible, and the benefits of cultural competency, in combination with extraordinary circus hula hoop skills, and a ladder.

A Black Swan Event is a business theory pioneered by the finance professional turned writer Nassim Nicholas Taleb after the results of the 2008 financial crisis. It is an unexpected event that has significant impact on the company it happens to.

"While a Black Swan event is unexpected at the point in time it occurred, after evaluating the surrounding context, experts (and in some cases even laymen) can usually conclude: 'it was bound to happen' " (Hasso Plattner Institute)

The use of Black Swan as a metaphor originates from the pre-1690's European belief that all swans are white because these were the only ones accounted for. At that time 'black swan' was a metaphor for something that did not exist. However, in 1697 the Dutch explorer Willem de Vlamingh discovered black swans in Australia. This was an unexpected event in scientific history and profoundly changed zoology. It also had impact on the stock markets of Europe at the time.

It is a mistake to see a complaint or Black Swan Event as a bad thing. It is an opportunity to test the authenticity of standards, and integrity, of an organisation. or company. It shows where the weaknesses are, and like a Review and Report, give the opportunity to identify weaknesses and problems and fix them.

Taleb said "I don't particularly care about the usual. If you want to get an idea of a friend's temperament, ethics, and personal elegance, you need to look at him under the tests of severe circumstances, not under the regular rosy glow of daily life. Can you assess the danger a criminal poses by examining only what he does on an ordinary day? Can we understand health without considering wild diseases and epidemics?"

The health of your company or organisation is determined by its reactions to the extraordinary- for example complaint, bullying and harassment. It is important to note thatf the complainants experience has been severe, it is likely that they will be post-trauma, and 'difficult'. There are a number of ways to make this process much easier for both complainant and company to deal with, as Judith Lanigan explains in her talk.

Included in this talk are hula hoop stunt skills from Judith Lanigan's performances 'The (hula hooping) Dying Swan, and 'What Not To Do On A Ladder'.

Music is provided by the artist on ipod or other device

For street theatre 4m x 4m PLUS area for audience

What Not To Do On A Ladder requires 3 m overhead clearance. 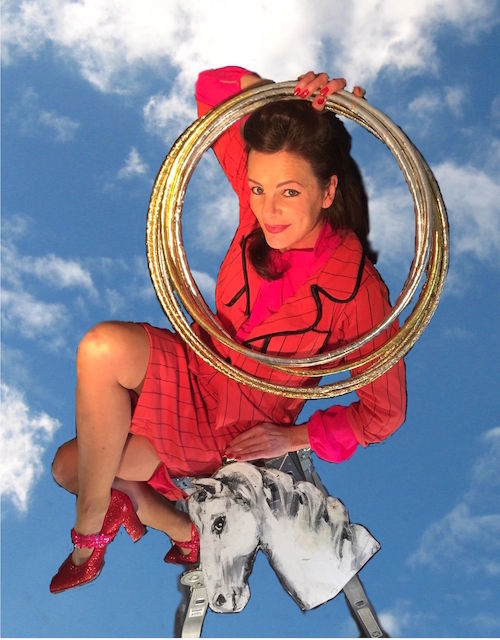