His presentations are widely acclaimed by business groups as interesting, informative, motivating and amusing.  He crosses the bridge between sport and business easily and intelligently and leaves his audience with plenty of "take-home product" for future consumption.

"......the greatest coach the game has seen. "
Stephen Jones on Australia's Bob Dwyer - The Times, London

" The Dwyer approach to team building takes mere mortals with unlimited potential and gives them the opportunity to rise to the top.  Successful business is merely this style of rugby, played in suits''
- Marketing Magazine 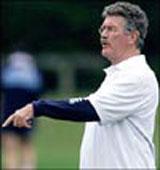