Alastair Clarksonis building a list of players at Hawthorn that looks set to become one of the genuine heavyweights of the AFL competition for yearsto come.

After making steady progress in his first two years as coach, 2007 became a ‘watershed‘year for the club with its first finals appearance since 2001.

Clarkson has stuck to his guns & persisted with his youth policysince being appointed Head Coach at the end of 2004. He has developed a young flock of Hawks that is steadily building a club culture of winning.

This youth policy has meant that the Hawks have some of the mostexciting young players in the competition. The likes of Lance Franklin, Luke Hodge, Jordan Lewis, JarrydRoughead& Grant Birchalllook like forming the nucleus of Hawthorn’s next Premiership team.

Clarkson has made a concerted effort to instil discipline & systems into the club, while pushing a game plan that generally emphasises hard running, the creation of space & ball movement to unmarked players.

A qualified teacher, Clarkson also has university degrees in sports science & business. A long coaching apprenticeship with stints at Port Adelaide (AFL), Werribee (VFL) & Central Districts (SANFL –Premiership coach), has meant that Clarkson is ready for the many challenges AFL coaching can throwup. 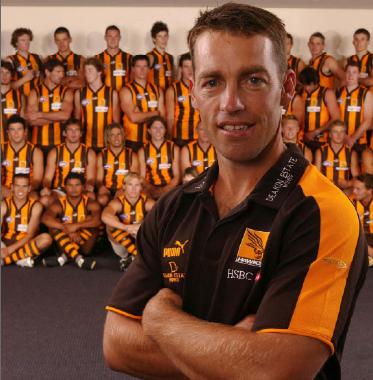