Request a Quote
Gary Ablett Jnr is an excitement machine. His precise use of the ball, quick hands & accuracy when kicking for goal has enabled him to become the most dominant midfielder in the AFL. Gary has always had mercurial ability with the ball in his hands, but a greater work ethic took his game to the elite level in 2007.

Gary won every major award (apart from the Brownlow Medal) in 2007 as he led the Geelong midfield to a record breaking Grand Final win. The fact that he was voted the Number 1 player in the AFL by his peers & took home his first club Best & Fairest Award by a significant margin (from Brownlow Medallist Jimmy Bartel) signified his rating in the game.

2008 was more of the same for Gary as he once again delivered above and beyond expectations. By the halfway point of the season Gary was again favourite to take home the Brownlow Medal which he retained for the remainder of the season after dominating every game he played until that point. Unfortunately Gary suffered a ankle injury against Fremantle in Round 15 and did not return until Round 19 when they took on Melbourne. Gary found his feet quickly upon returning and finished the season off spectacularly. However his period of absence from the game cost him dearly on Brownlow Medal night as he fell short of taking home 'Charlie' by two votes. However, the week prior to the Brownlow Medal, Gary had for the second consecutive year been awarded the AFLPA MVP Award and selected as an All Australian midfielder.

Disappointment followed on Grand Final day as Gary and the Cats suffered an upset loss at the hands of Hawthorn. However this was no fault of Gary's as he put in a stellar performance gathering 34 disposals, kicking 2 important goals and almost single handily got Geelong over the line. This was reflected in the selectors voting of the Norm Smith Medal with many having judged him best afield, but again he fell agonizingly short as it was given to Hawthorn’s Luke Hodge.

Season 2009 saw Geelong get back on track with yet another Grand Final appearance, and their second Premiership in three years. Again Gary’s season was outstanding where he finally took home the Brownlow with a total of 30 votes, 8 votes clear of runners up. Adding to his Brownlow and Premiership medal was his second club best and fairest award, along with his third consecutive AFLPA MVP and AFLCA Player of the Year Awards. This capped off one of the most dominant individual seasons ever recorded.

Gary’s dominance continued throughout season 2010 season as he tried everything in his power to get the Cats their third premiership in four years but they were out classed by the eventual premiers Collingwood in the Preliminary Final.

At the conclusion of the 2010 season Gary decided that he had achieved all that he could at Geelong and has taken a fresh challenge by joining the newest AFL team the Gold Coast Suns. Gary is looking forward to helping develop the Gold Coast Suns young and talented list as well as establishing the Suns as real contenders for premiership success. 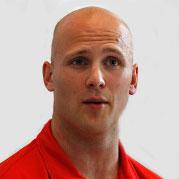