Stephanie Rice born 17 June 1988 in QLD Australia, is an Olympic gold medalist swimmer from Brisbane who holds the world record in the 200 m and 400m individual medley as of August 10 2008. She was the first woman to complete the 400m medley in under 4 min, 30 seconds. Stephanie is trained by Michael Bohl a quite popular Australian coach.

Time for Stephanie to Cash in Big time

Stephanie rice is apparently worth millions according to head marketing people, Stephanie rice shot to stardom after winning 3 gold medals in the 2008 Beijing Olympics, along with Stephanie's stunning looks and great personality she is very marketable to any one who is willing to spend money on a advertising campaign based on Stephanie rice.

Michael Phelps may be wroth 100s of millions to billions in terms of advertising expenditure but our Stephanie rice is defiantly going to cash in on her success and make millions.  Magazines such as new idea and also women's day have already places Stephanie rice on the cover, how often do you see a girl on the cover just for winning a swimming race.

Steph was the Gold medalist in the 200 meters Individual Medley at the 2006 Commonwealth Games in Melb, where she defeated Olympians Brooke Hanson and Lara Carroll to claim the gold medal in the event.

2008 career for Stephanie a quite promising one for steph rice.

At the 2008 Australian Olympic trials, Rice broke the world record in the 400 m individual medley. Rice stopped the clock at 4 minutes 31.46 seconds.

At the Beijing Olympic Games, Rice received her first-ever Olympic medal, Australia's first gold medal of the games and its 400th summer Olympic medal, winning the 400m individual medley in a time of 4 minutes 29.45 seconds.

The glamorous athlete was romantically linked with fellow Australian swimmer and 50m freestyle world record holder Eamon Sullivan, although they are having a break at this point in time. 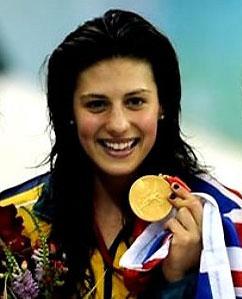