Multi-Award winning Scottish / Irish / Australian band The BordererS formed in 1994 and have released 8 albums, 4 EP's, 2 kids albums and been included on 17 compilation albums all around the world.

The Borderers became a band by accident when Jim was backpacking in Australia in 1993 as part of a round the world trip.  He says: “I was just visiting South Australia to visit a friend when I got invited to a recording studio to hear this band.  I loved their sound so much that I eventually co-produced the album, got 5 of my songs on it and married the lead singer”.

Lead singer, Alex, was born in Belfast, Northern Ireland and came to Australia in 1987 and lists Annie Lennox and Joni Mitchell as major influences.  Jim was born in Glasgow, Scotland and arrived in Australia on Christmas Eve 1993 and is influenced musically by AC/DC, Thin Lizzy, Status Quo and Talking Heads.

The Borderers pride themselves on their independent spirit – running their own indie record label – Celtic Records – which to date has combined sales of 70,000 units.  This indie approach paid off recently when the band won the Independent Music Award in the US for “Sinner and The Saint” in the Gospel Music category.  The song now goes out to 11 million people via Borders Bookstores and eMusic.com

The Borderers are well known performers at many of the world’s top music festivals having played Byron Bay Blues & Roots, Port Fairy Folk, Edinburgh and Womad Festivals in Australia and the UK – as well as touring Canada and the USA.  They’ve also supported artists including Tom Jones, The Proclaimers, The Chieftans and Shane McGowan from The Pogues.

To Promoters & Agents out there: The band are touring Europe & Asia in July/Aug but you don't have to worry about the cost of their air fares.
They're all paid for!!!!!!

What sets the BordererS apart from other bands is their ability to get the whole audience involved.

Voted most popular act by the public at many festivals. Here's what others have to say:

They also have a mellower side which was illustrated in their C.D. "Woman" ( The title track just missed out on being the U.K.'s entrant for the 1999 Eurovision Song Contest ) and their performances with the Adelaide Symphony Orchestra, who accompanied them on 2 of the band's Australian Xmas songs.

The group have worked with the English engineers Paul Gomersall ( George Michael, Kate Bush, Eric Clapton & Sinead O'Connor) and Chris Dickie ( Annie Lennox and the Pogues ). The title track of the CD "The Gathering" has been used for a national ABC TV I.D. Logo and this song plus another from the album were on the ABC Radio National Playlist for a year.

The band are currently awaiting to see if they've secured the soundtrack to an upcoming Scottish/ Australian movie, whilst the sountrack to the Ch. 7 ID Logo in Adelaide & Brisbane was also co-written by Jim, Alex and Sean Timms.

On a different note, the kids musical/theatre show they have co-written with Splash Theatre Co. called "Ticklish Allsorts" has just returned from a very successful tour of Russia.
At the recent "Port Fairy Festival" the BordererS generated the 2nd highest amount of CD's sales over the whole weekend.

Lastly, 29 BordererS songs have had linedances choreographed to them. 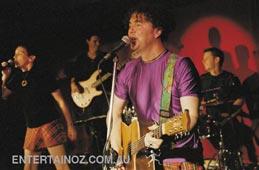